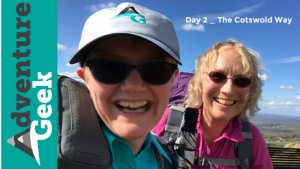 Weather: We were truly blessed with a fabulous spring day.

The sun was shining all day and we had clear views from Cleeve Hill. We could even see The Black Mountain Range and The Malvern Hills from the top of the escarpment. Wow = just wow!

We lost an hour as the clocks changed so we set out at 8.15am, which really was 7.15am. The walk from Hailes to Winchcombe was relatively easy although we were a little stumped by a random zebra crossing sign, that had no zebra crossing!

Winchcombe is full of history 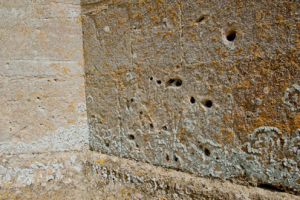 Winchcombe church with the bullet holes.

Apparently, Winchcombe means “Valley with a bend”.  It is a very quaint little town and a similar stature to Chipping Camden.  The church is certainly a prominent feature.  Whilst the other trekked on ahead, Hilly and I popped up to the church to take a closer look at the strange looking gargoyles and to witness the bullet holes where Royalist prisoners were lined up and shot in the Civil War.

By far, the weirdest attraction for Winchcombe was the 6ft gold-plated cockerel that sits proudly on top of the church.  You can see it for miles and in the evening it is illuminated.  We joked about the “clock with the cock” as the church clock kept chiming every hour.  As we progressed along the trail we could hear it chiming for miles!

We climbed up a very steep hill out of Winchcombe, stopping to have a quick game of poo sticks! (I can't remember who won?).  As we reached the top, Rachel and I decided that the reward for climbing this steep hill would be to discover the next Adventure Geek Box.  So we hid it well and details will be found of its secret location in the Go Take A Hike Travel Guide.  After safely securing box number two we were approached by a white pickup truck.  An old farmer with two border collies in the back beeped his horn, pulled over next to us and wound his window down.  In a very southern accent, he mumbled the words “You going to the Knapp?”.  “Yes, we replied”.  He pointed to the next hill and started laughing.  “I hope you've had your Weetabix,” he said.  Rachel and I looked at each other and giggled as we watched the farmer drive off into the distance.  Then we began the climb!

We then realised what he meant by “needing your Weetabix” as the next hour was a gruelling climb. Belas Knapp was worth it. This was the long barrow that had housed 26 skeletons with elongated heads!

The name Belas Knap means “beacon mound” but it is actually a Neolithic chambered long barrow.  I was fooled by the centre of the forecourt, where a false entrance is constructed.  It took me a while to realise that the main entrance is on the side.  As you enter the barrow it leads to four small burial chambers known as the Cotswold Severn-Cairns.

The Cotswold Way is the perfect place for trail runners and you will often see marathons and other running events along the path.  Today was no exception as we crossed the mile 11 checkpoint.  A lady was camped out in the sunshine in her foldaway chair, thermos flask, woolly hat and high vis jacket.  We stopped and chatted for a while and then moved on.  The half marathon was taking a slightly different route to us, but we would meet up with them again at mile 13 after we had descended through the woods.

Sure enough, at the end of these woods, we soon found ourselves amongst the runners.  They all looked exhausted and filthy as they ran or jogged by.  We clapped and cheered each and every one of them to show some encouragement.  They had less than two miles to the finish line.

Cleeve Hill Common was the highlight of the day

Cleeve Hill Common was certainly the best highlight of the day.  It was a tough climb, but when you looked back from where we had come, the views were just breathtaking.  Little did I know that they were about to get even better after lunch!

We finally made it to Cleeve Hill Golf Club where we enjoyed a welcome break.  We drank coffee, had some lunch and rested our feet.  There is a sign on the front of the clubhouse requesting that visitors remove their muddy shoes before entering and we obediently complied.  We all had a go at cleaning our boots on the automated boot cleaner (see video).  Little did I know that it would be a complete waste of time as later that day Hilly and I would be walking through the worse mud bath I have ever seen!

It was at Cleeve Common where we said our farewells to Julie, Becky and my daughter Rachel.  My heart was heavy as I hugged Rachel goodbye.  She was loving every minute of this journey and I knew that she really wanted to continue, but GCSE's and mock exams were calling, so it was not meant to be.

Onwards and upwards to Charlton Kings

The last stage of day two my partner in crime was Hilly.  Hilly is a fellow Nordic Walker and keeps a good pace.  After leaving Cleeve Common Golf Club we climbed a gradual ascent to the highest point on the Cotswold Way, Cleeve Hill.  When you mention a “hill” or “the highest point” on the Cotswold Way, you will visualise a peak. A steep climb, where you do a little dance on the top and then work your way back down again, but Cleeve Common is not like that at all. It’s exceptionally flat. Flat it may be, but the views are breath-taking.  You can see the Severn valley and the Black Mountains of Wales, the Brecon Beacons and even the hills of Exmoor (if you are lucky).

Did we get lost? 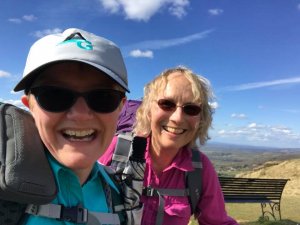 Hilly and I at Cleeve Hill

Yes, but only the once.   We were pointed in the right direction by a man who was walking barefoot!  He needed to clean his feet so he walked through some snow that was in a ditch nearby.  There are some strange, but helpful people along The Cotswold Way!

The final stretch of today’s walk was met with lush green fields, fabulous wooded areas where we found wild garlic. Have you ever smelt the leaves of wild garlic? Wonderful!

We had a fair few muddy areas, but one particular area which was made worse due to the horses pounding the narrow lane.  Hilly and I navigated this by trying to walk along the sides of the track but we both kept slipping into the mud which covered our boots and seeped into our socks.  It was probably the most unpleasant part of the journey as there were also brambles on either side of the track.  So you had a choice.  Sticky mud or painful cuts from the bushes.

Charlton Kings is a large town

I was so happy to see the sign for Charlton Kings which is where we would be staying this evening.  I was due to meet my next hiking buddy Diana at the B&B and her husband Peter would be driving Hilly home.  At the welcome sign for Charlton Kings, I launched Google Maps to find out exactly where the B&B was and my heart sank.  It was still 1.6 miles away.  I assumed Charlton Kings was another quaint Cotswold Village, but no, it was a large town with all the regular amenities.  I sent a text to Diana to say we may be another 30-40 mins as we were still a little way from the B&B.  As we continued on our route, following the trusty directions from Google Maps, a car pulled up beside us.  It was Peter (Diana's husband).  We had walked 17 miles and his little car was such a welcome sight.  We removed our boots and literally collapsed into the vehicle exclaiming our thanks over and over again.  (If you are reading this, then thanks again Pete!). 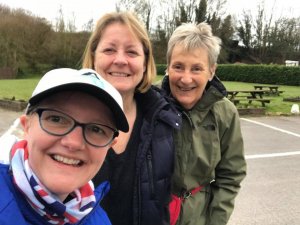 I hugged Hilly goodbye and watched her and Pete drive off into the sunset around 6.30pm and I enjoyed a hot soak in the bath before venturing out into the town.  The landlady took my clothes that I had washed in the sink and put them in the tumble dryer so that they would be fresh and clean for the morning.  She also offered to drive us back to the trailhead in the morning, which saved us at least 1.6 miles! How brilliant is that?

After a quick stop at Sainsbury's for lunch for the trail tomorrow, and a bite to eat at the pub recommended by the landlady, I was ready to hit the sack.  It was only 9 pm and I was exhausted.  Diana joined the family in the lounge downstairs watching Homelands and catching up on her book, whilst I completed my journal, printed my photo of the day and then turned out my light.  I don't remember anything else until 5 am the next day.  I certainly did not hear Diana come back to the room, and judging by the state of the duvet and covers, I hardly moved all night!

A smaller walk tomorrow, but the sun is forecast again, so fingers crossed!