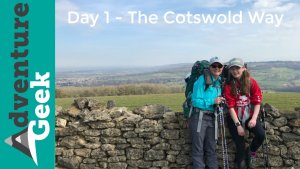 Day 1/8 of The Cotswold Way – Chipping Warden to Hailes

I have been planning to walk the Cotswold Way for the last five months.  I decided that walking southbound (SOBO) was the best option for a few reasons.  First of all, it was easier to access public transport from Bath and the thought of finishing my 102-mile hike at Bath Abbey seemed more inspiring than the quaint Cotswold town of Chipping Camden.

As I would be walking the route the week before Easter, I had to book my accommodation early.  I decided to use bed and breakfasts, and the use of the Airbnb application was brilliant! I met many hikers on the route who decided that camping was a good idea, but with the English weather forecast of rain, snow and hail, I think I made the right decision.

I was feeling confident and super organised!

A Steep Climb to Dovers Hill

We (six of us) arrived at Chipping Camden at 8.30am.  We were excited, but I needed to take a quick walk up to the Church to take some photos, another person needed the loo, and we all decided that a coffee was in order before we set off for the day.  We eventually hit the trail at 10am.

The walk out of Chipping Camden is rather steep and a bit of a shock to the system.  By the time we reached Dovers Hill, most of us had taken off our jackets and had hit the bottle (water bottle!).  The views from Dover Hill was just amazing and it was the first taste of what was to come, offering fine views over towards the Malvern Hills.  Apparently, on a clear day, you can see Wales from this point (60 miles away).

Although owned by the National Trust, Dovers Hill is known for the famous Cotswold Olympick Games.  Yes, I have spelt that correctly.  In fact, the Olympick Games was established some 274 years before the Modern Olympic Games.  So what is the Olympick Games?  It is a crazy English sports competition of shin kicking.  There are usually three people involved.  Two contestants and a referee (known as a Stickler)

Waymarking Along The Cotswold Way 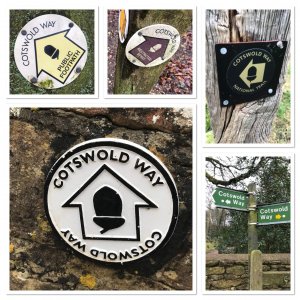 I learned the hard way, but the signage for The Cotswold Way is not as straightforward as you think.  In a perfect world, you would have the same coloured signs that point you in the right direction for each turn.  The Cotswold Way likes to keep the signage interesting.  You will see blue, white, yellow, brown, wooden, ceramic, plastic, green and eventually black stickers in Bath.   Navigation of this trail takes concentration and an awareness of time.  If you have walked for 20 mins without seeing a sign then you have probably gone wrong somewhere.  In my experience, it is much better to retrace your steps back to when you saw the last Cotswold Way sign, rather than trying to figure it out yourself using maps and apps.

After a 2.5 mile detour, we were delighted to see Broadway Tower in the distance.  As we had lost time, we decided that the tour of the museum would be best left for another day.  I enquired about the Nuclear Bunker but it was not open to the public until the following weekend.  We stopped and ate our packed lunch whilst enjoying the views, and then headed off towards Stanton.

Now, I am not that scared of many things, but there are two creatures that make my hair stand up on end and has me shaking in my boots.  The first one is cows and the second one is snakes!

I was about to meet a whole bunch of cows that were blocking our path.  We could not go back, we had to simply navigate our way through them.  Hilly and Jackie had already made it, and now it was my turn. My 15-year-old daughter was behind me, followed by Julie and her 14-year-old daughter Becky.  I was talking to myself saying “Cows don't hurt, they are vegetarians, they don't eat people”.  I told everyone to not look them in the eye and to just keep moving without making any noise.  Slowly but surely we made it through and my heart started to return to a normal steady beat.  Little did I know that this was to be an easy crossing compared to a later episode!

Arriving in Stanton – Prettiest Village in The Cotswolds 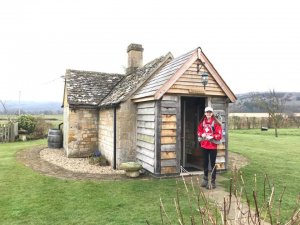 Our cute little b&b called The Bakehouse (found on Airbnb)

Stanton is proclaimed to be the prettiest village in the Cotswolds and I could see why.  The thatched cottages and the honey-coloured stone, the quaint oil lanterns and the sleepy feel to the place was just like stepping back in time.

Julie was suffering from blisters, Becky had a poorly ankle and Hilly had a deadline to get to her bed and breakfast.  It was gone 5 pm and time and the light was running out.  Everyone decided that the best decision was to catch the bus from Stanton to Winchcombe, apart from Jackie who was making her way home today.  Rachel and I decided that as it was only 2.5 miles to get to our bed and breakfast that we would hit the trail and walk back, so that's what we did.  We had head torches and the route was quite an easy one.  We were at the beautiful Bakehouse (b&b) by 7 pm.

By the way, if you are going to catch the bus from Stanton, then note that the bus does not actually leave from the bus stop (as you would presume).  You need to walk at least 15 mins down the road to the main road and flag the bus down!  Needless to say, the rest of our party missed the bus and phoned for a taxi instead.

We met up with everyone at The Corner Cupboard Pub and had a lovely meal before finally retreating back to the warmth of our beds.

This experience has certainly seen some challenges, but I am enjoying every minute!