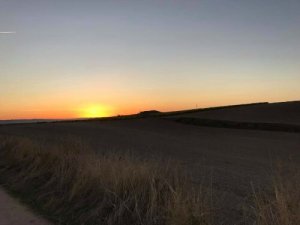 Well, that was an interesting journey!

Beautiful scenery over the Pyrenees

My clingfilm is tucked neatly into my trekking pole holder on Nellie my rucksack as I watch the bus pull into the station. I put Nellie in the hold and climb on board. I'm not a good traveller when it comes to coaches and busses and I know I will need to think of something to distract myself otherwise I will be sick. I keep checking my phone to see if Laura had messaged me back but to no avail. I had this awful feeling that I had let everyone down. I imagined them sitting at the bar waiting for me and talking amongst themselves saying how unreliable I was. I had no other way of communicating with them that I had no choice but to leave Logrono as there were no busses the following day (Sunday) and my only chance of catching my flight was to leave tonight.

Within 15 minutes of the bus journey, I was starting to feel queasy. My jacket was over my head and I tried to close my eyes and get some sleep. It was only 7.15pm so sleep was never going to happen. This friggin bus was going to stop at every single village on route to Pamplona. I opened my eyes and took in the scenery. With a grin on my face, I witnessed many familiar sites there was the supermarket where Lou and I shopped in Puerta La Reina, the forest trail where I had heard sounds of other walkers but there was no-one there. Up in the distance were the iron statues and the magnificent range of windmills. We stopped a few times in Estella as we dropped people off and collected new passengers. To my relief, Erik called me via Facebook messenger to ask where I was. The sound was really bad but he got the message that I was on a bus on my way to Pamplona. He then passed his phone around so that everyone could say goodbye. He is such a thoughtful man and I will be forever thankful for his wisdom and friendship on the trail.

I was starting to freak out

I arrive in Pamplona around 9.30pm. It is pitch black and I have no idea where I am going to stay for the night. Why didn't I book a hotel earlier today? I was annoyed at myself for being so stupid. I told myself that it didn't matter. This was Pamplona. There will be 100's of places to stay. How wrong was I? I pulled up the Wise Pilgrim app and it gave me a list of Albergues and Pensions that were close by. I didn't want to be far away from the bus station as I had a bus to catch at 10 am tomorrow. The first two hostels displayed “No vacancies” or “closed for the season” on the front door. At this stage, it was gone 10 pm and I was starting to get a bit freaked out. I was a female on my own, in a huge city and it was a Saturday night. Drunken people were spilling out from bars and a hen party was just ahead of me accompanied by a giant blow-up doll. I really did not want to be there. So I did what any sane person would do and I phoned home. 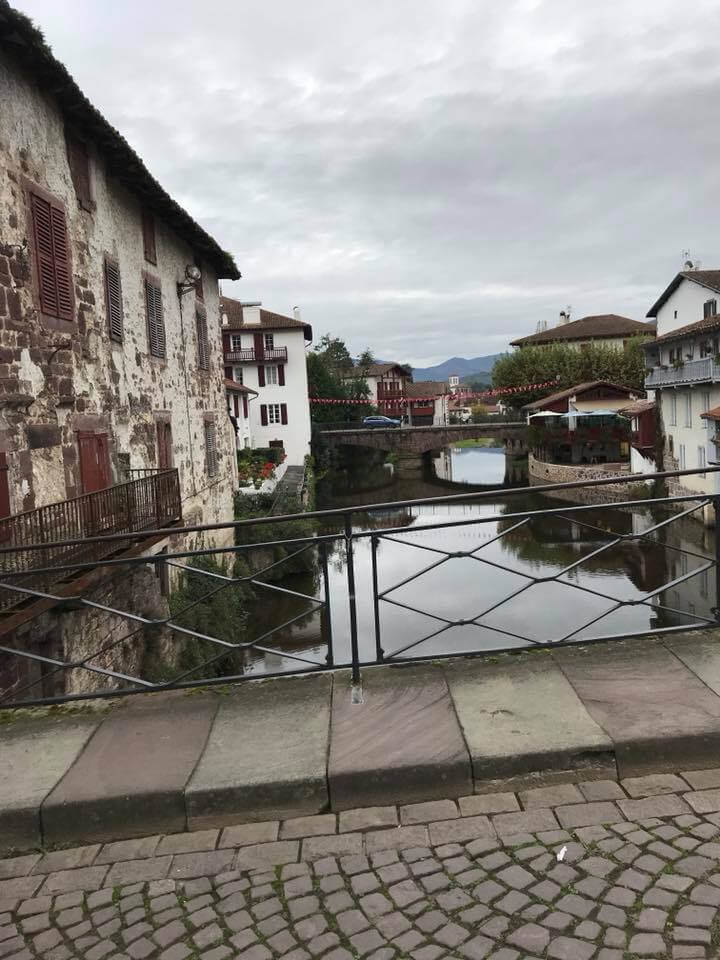 My husband has a warped sense of humour

Matt answered the phone immediately and he kept me calm. I had Google maps open and was walking towards another albergue that was on The Wise Pilgrim app. I didn't need his help, I really just wanted someone to talk to so that I didn't feel all alone. We agreed on the phone that if this next place had no room at the inn then I would check into the huge hotel across the road that looked mega expensive. Matt was busy looking it up on his computer whilst he kept the conversation going. If any of you know Matt then you will also know that he was a very warped sense of humour. I arrive at a Pension (which is a like a B&B). A little Spanish man opened the creaking door and I said “Habitacion por favor?” – (Room please?). “Si Si” and he beckoned me in. At this stage, I tell Matt to PLEASE stay on the phone. I followed the little old man up three flights of stairs and then we went into a room that looked like his living room. A dog started barking from behind a closed door and the man just stood there not saying anything. Knowing that he spoke no English, I talked freely with Matt on the phone, explaining exactly where I was and what was happening. Matt responded, “OMG Julia, you know that he is gonna chop you up into 1000 pieces don't you?” – yeah, that didn't help much!

What a great hostel 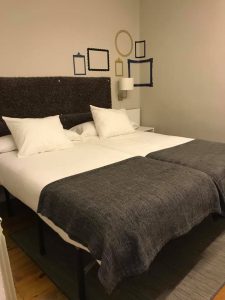 My bed for the night.

I put the phone down as I needed to get my Google translate app out. Through hand gestures, Google translate and my very poor Spanish, I understood that he was waiting for someone else to come and then check me in. A few more minutes passed and a lovely older lady who was very “mumsey” walked through the door and gave me a big hug and told me that she would “look after me”. She had a kind face, so I followed her up another two flights of stairs and she showed me my room. It was perfect and the host could not do enough for me. She showed me where everything was, gave me advice on how to lock the door and told me to take my time leaving in the morning. She would not be providing breakfast but the cafe next door provided coffee and pastries. She took my Pilgrim passport and money and disappeared for a short while. She returned with my change, a stamp in my credential and a smile on her face. She was very proud of her decor and wanted me to enjoy it. I certainly enjoyed the free wifi and the huge double bed!

The last leg of my incredible journey

In the morning I caught the bus from Pamplona to San Sebastian and then changed buses (with 5 mins spare) and headed to Biarritz airport. I did get some very funny looks as I took out my clingfilm and started to wrap up Nellie. She was tucked up all safe and sound as I sent her on her way to the baggage drop off area. With exception to a delayed flight, and having to sit around in an airport for five hours, I was content knowing that I was on my way home and I would soon be reunited with my family. I really missed Rachel and Matt and I was craving a hug from them both. I would be seeing Julie (my bestie) and Rachel at Stansted airport in a few hours and I couldn't wait!

In the back of my mind, all I could hear was Erik's voice saying “Your true Camino starts when you get home”. I was so ready for the next chapter in my life. Bring it on!