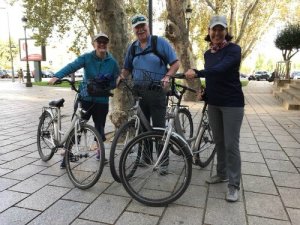 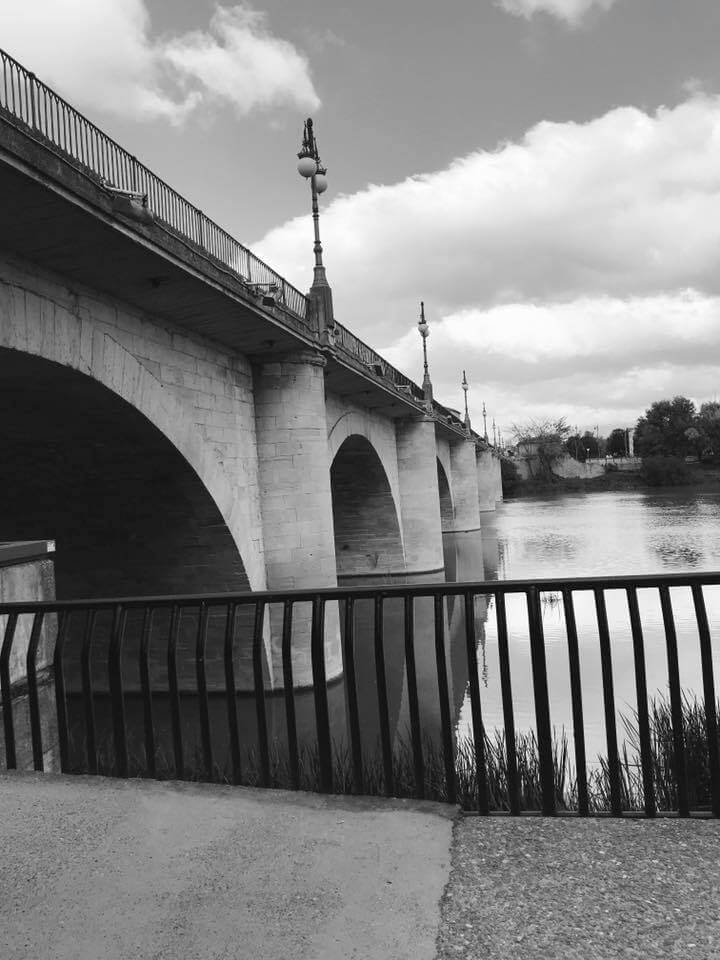 Down by the river in Logrono

I’m wide awake at 3 am as Logrono is a city that never sleeps. The windows are open and parties/fiestas are very loud on the streets below. I read my kindle for a while and eventually, I drift off again only to be woken by the Pilgrim Shuffle about 6 am.  So much for a lie-in on my last day.

I'm up and about at 6.30am and make my way into the community kitchen to grab a Nescafe Latte.  I find a jug in the cupboard and fill it with water so that I can put it in the microwave.  I don't think that the Spanish have kettles.  I've only ever seen one in Roncesvalles.  The kitchen was buzzing with activity.  A

young lad who was camping on the grounds outside was cooking a paella dish for his lunch later that day, and a cyclist was cooking the most delicious smelling Spanish omelette.  As my husband and daughter will tell you, cooking has never been my forte.  In fact, I have put a frozen pizza in the oven with the cardboard still on the bottom on more than one occasion.  I am in oar of those who can quickly knock something up that tastes and smells so delicious with limited resources.

Lou joined me for breakfast, but it was not long before we were saying our goodbyes and parting company for the very last time.  I wished her a beun Camino and promised to keep in touch via email (as she is not a Facebooker), which we have done.  (Hi Lou, if you are reading this).

I met up with Paul and Laura (Canadians) for breakfast.  They were also spending an extra day in Logrono and had agreed to meet Erik at 10am to collect bikes.  Today was going to be a real adventure and I couldn't wait.  At 10am we trundled over to the tourist information office to collect our bikes.  Trying to understand the machines was a bit of a nightmare, but we got there in the end.  We had left our packs in convenient lockers in a nearby museum and we were off.  As we only had three bikes, and there were four of us, Paul decided that he would gracefully bow out and let me, Laura and Erik have some fun for the day.  (Thanks, Paul, if you are reading this). 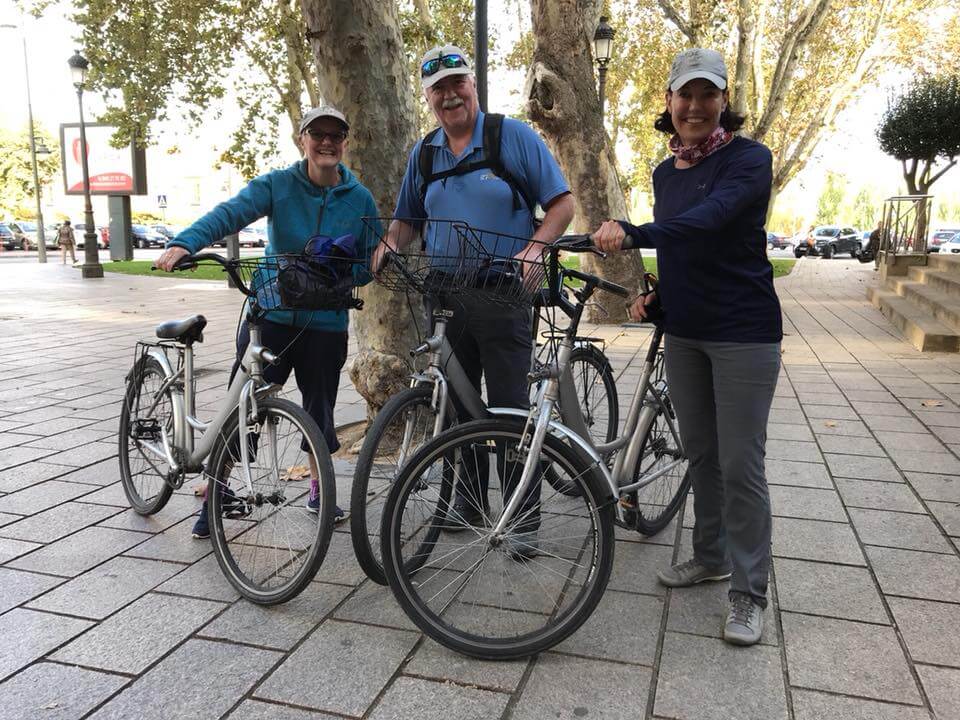 Me, Paul and Laura (Canadian Pilgrims)

If there is one thing that I regret today, it was not checking the bus timetables for Logrono to Pamplona for tomorrow (Sunday) whilst I was at the tourist info collecting the bikes.  I have no idea why I didn't sort it out there and then, but hey ho, hindsight is a wonderful thing.

What a wonderful afternoon 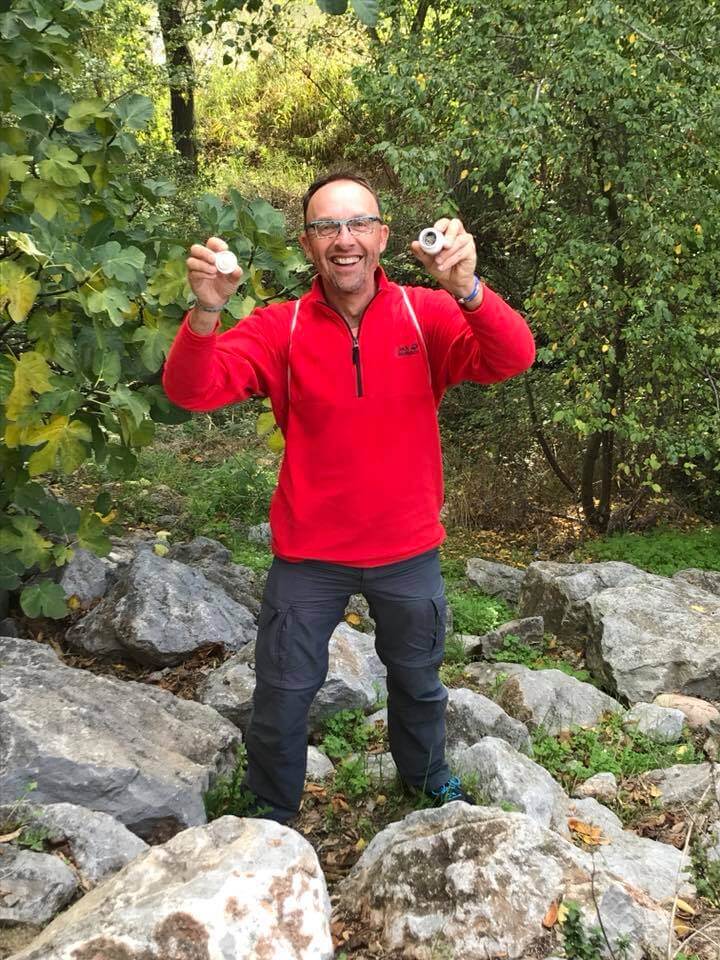 Today was certainly the best day of my whole trip.  I experienced so many new things and it was all down to Erik.  Erik is such a warm and friendly character who speaks many languages. He has a wicked sense of humour and a boyish enthusiasm for life. It’s contagious and everyone soon follows his lead (including me). 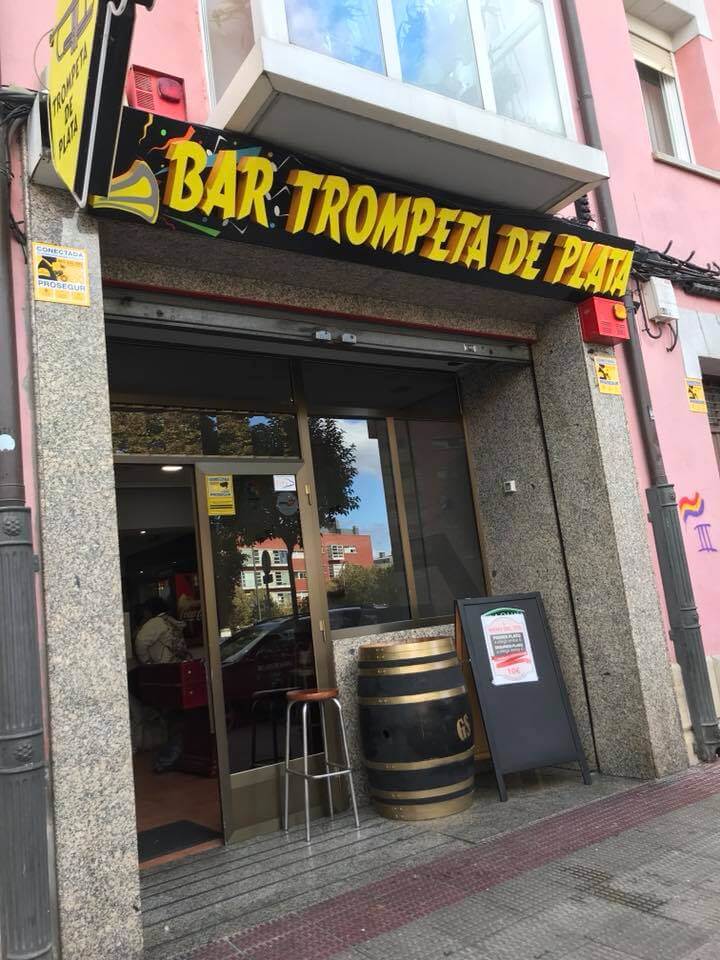 The little Spanish bar where we had a very authentic lunch.

We stopped in a proper Spanish bar in one of the back streets for lunch.   As Erik speaks fluent Spanish he wanted to find somewhere that would give us a true Spanish experience, not a commercial experience.   The place was very busy and we were the only people in the restaurant who were not Spanish.  The owner of the business was also the waiter.  Erik asked for the menu, but rather than giving us printed menus to read he simply recited about 10 dishes to us and asked us to choose.  I had meatballs to start with, then paella with rabbit, and rice pudding to finish.  The rabbit liver was not something that I will indulge in again.  This was all washed down with lots of good Spanish wine, of course.  I have never eaten rabbit before, so this was another first for me.  I don't think I will be eating it again as it was full of lots of little bones which was not to my taste.

I'm not a big eater and this was a huge meal to have in the middle of the day.  I had still not finalised my plans for tomorrows travel, so I made my excuses and bid everyone goodbye, knowing that I would see them later for the wine tour at 5 pm.  We were then going to go out on the Logrono famous tapas crawl (like a bar crawl but with tapas) around 7.30pm.  I was excited about experiencing more of what Logrono had to offer.

Disaster strikes and my plans change

At 4pm I entered the Tourist Information Centre to find out the best way to get from Logrono to Biarritz Airport tomorrow.  After 30 mins of chatting with the tourist lady we discovered that it was physically impossible to get to Biarritz in time for my flight on a Sunday.  Panic set in.  What on earth was I going to do?  I had paid for a rather luxurious hotel tonight in Logrono as it was my last night, and I knew that I would not be able to get a refund.  I asked the tourist officer to see how much a taxi was to Pamplona tomorrow as perhaps that would be the answer – £120, er no, next plan. 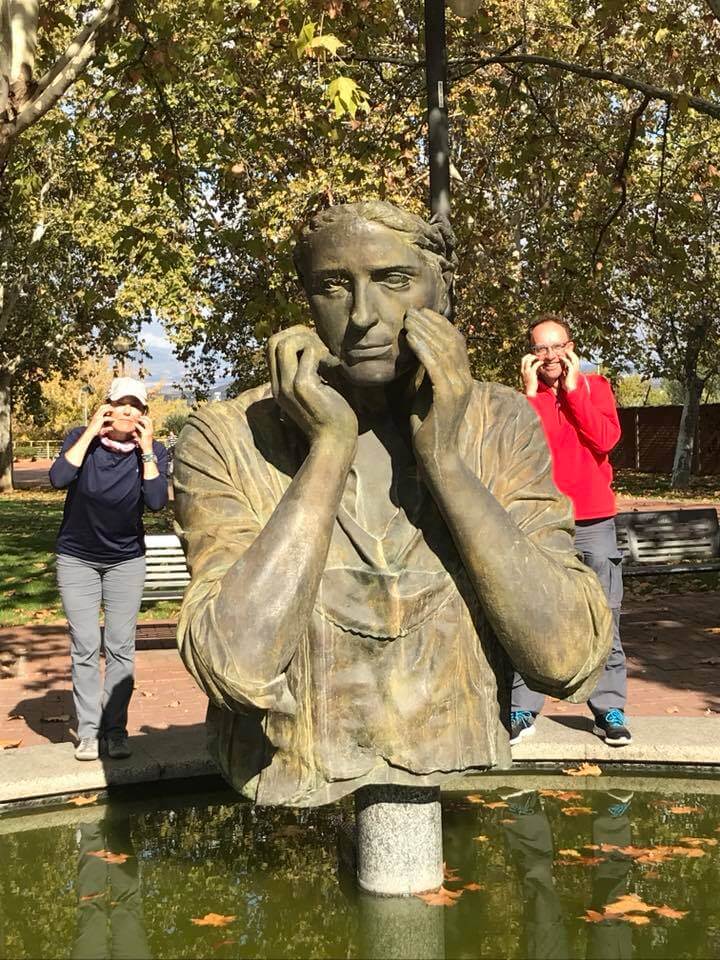 One of the many statues in Logrono.

The only option was to get a bus this evening to Pamplona and then catch the early morning bus to Biarritz airport in the morning.  I collected Nellie from the locker room in the museum and headed for the hotel that I had booked.  I was hoping that I could sweet talk them into giving me a refund as I now had no need for the room, and I only booked it a few hours ago.  Google translate explained my situation to the receptionist, who was sympathetic but would not offer me a refund.   Frustration got the better of me and I asked for the key to my room.  If I was paying for it then I was going to use it.  Even if it was only for 1.5hrs.  I enjoyed a long leisurely hot shower.  I had a go on the bidet and packed all the freebies into my pack.  I did starfish movements on the bed so that they had to remake the bed and charged my phone up as much as I could in that short amount of time.

I never got to say goodbye

With 30 mins to go until I had to catch my bus, I sent Laura and Erik a message on Facebook to explain why I was not with them tonight.  I was gutted as it would have been the perfect end to a perfect Camino.  But I like a challenge and Pamplona was beckoning.   After messages had been sent the only other thing left on my list was to purchase some cling film in a local supermarket.  I noticed that there were not facilities to shrink wrap Nellie at Biarritz airport, so I needed to do this myself.  The cling film was only €1.89 (much cheaper than the £10 at Stansted airport).  With the help of Google maps, I found the bus station, and I was on my way.

WEATHER – a bit overcast today so a fleece was needed.

MY MOOD AND FEELINGS – I feel very privileged to have spent this last 10 days with some truly kind-hearted and selfless people. I’m humbled by their generosity and openness. It’s been an amazing experience and I can’t wait to return in 2018 for the next leg of the journey.

LESSON LEARNED: I experienced a pizza massage in the middle of a Spanish bar today. It’s one of those things that is easier to show you, rather than explaining in writing. So if you see me in person then ask me “what’s a Spanish massage” and I will give you a treat (unless you are Spanish, as apparently it means something very rude!).