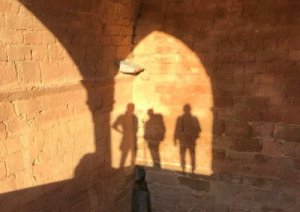 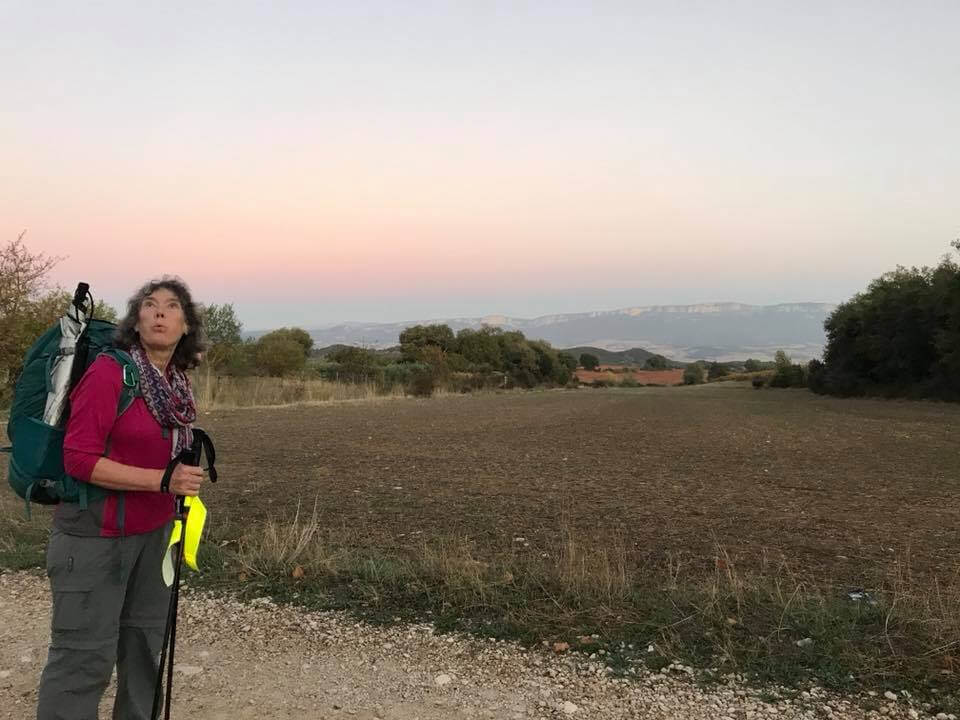 I was lying on the bottom bunk in the hostel in Estella when an older Spanish lady hobbled in. She looked exhausted and very emotional. I tried talking to her but she spoke no English. Isn’t it funny how people think that if you talk slower and louder then a miracle will happen and you will understand every word? Anyway, she looked at the bed that she had been allocated (top bunk) and just stood there. I whipped out my Google Translate app and asked her if she wanted to swap. She was delighted and eagerly hugged me. So that was my good deed for the day. Needless to say, she snored like a friggin freight train but I slept with a clear conscience!

Today we were going to Los Arcos, which has been the hardest day yet. I can’t tell you why? Perhaps it’s the sun or the scenery that got monotonous after 10 miles, or just me feeling tired. It certainly was not the longest day but it felt like it!

Everyone was up early.  Even the Spanish lady (she must have had a good nights sleep).  We were ready to hit the road in the dark at 7 am.  I felt quite confident as yesterday I had discovered a Decathlon store (similar to Go Outdoors in the UK, or REI in the US).  I couldn't help myself, but I purchased a new mini laundry bag (because I really NEEDED one – or so I told myself), and a new shiny headtorch (which I actually did need).  Headtorch on, and me, Lou and Jaume headed out of Estella. 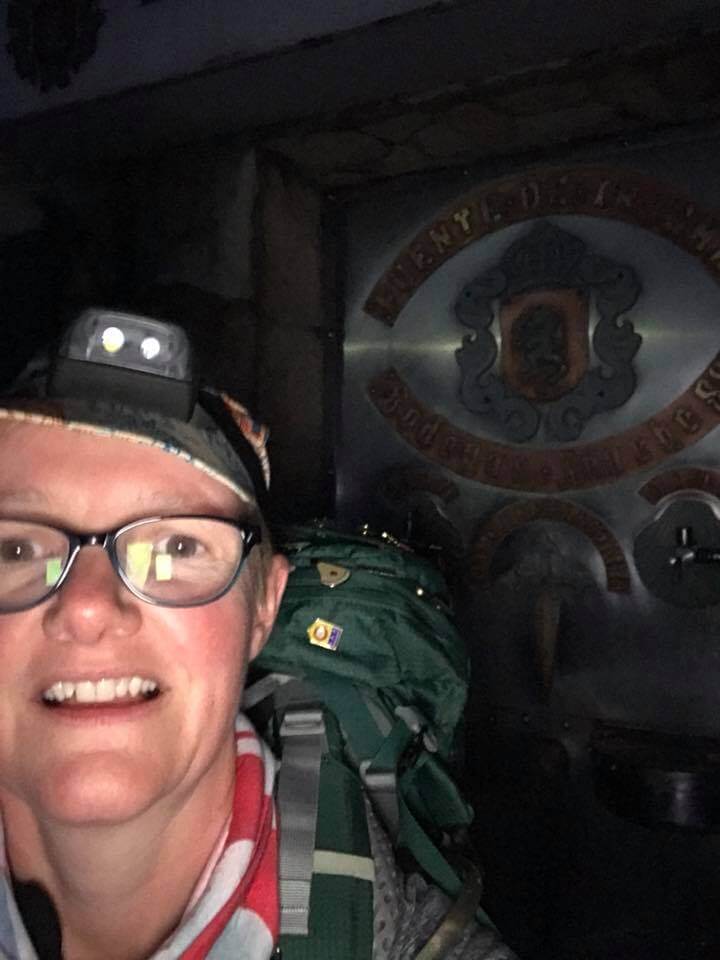 terrible photo of me at the wine fountain.

We went on a bit of a tour before finally landing at our first place of interest the famous Wine Fountain – “Fuente del Vino”.  To my surprise and delight, the wine fountain was open!  Free wine at 7.30am is exactly what you need on a hike like this.   We grabbed our Camino shells (tradition is to drink the wine from your Pilgrim shell) and filled them with the dreadful red wine that came from the tap.  Yes, it was truly dreadful and freezing cold, but it had to be done.

We continued up the hill and stood outside the monastery which was beautiful in the early morning light, but closed up for the season.  Once again we were blessed with an amazing sunrise over the hilltops.  By this time Jon Clair was walking with us.

Just before Villamayor de Monjardin, where we stopped for a coffee break, there is an unusual 13th century Gothic Fountain of the Moors.  There are steps that lead down internally to the water level.  We all stopped here for some shade and to throw a few coins into the water at the bottom.  I took a photo which I am really proud of.  I later googled this spot and found that the fountain was restored in 1991. 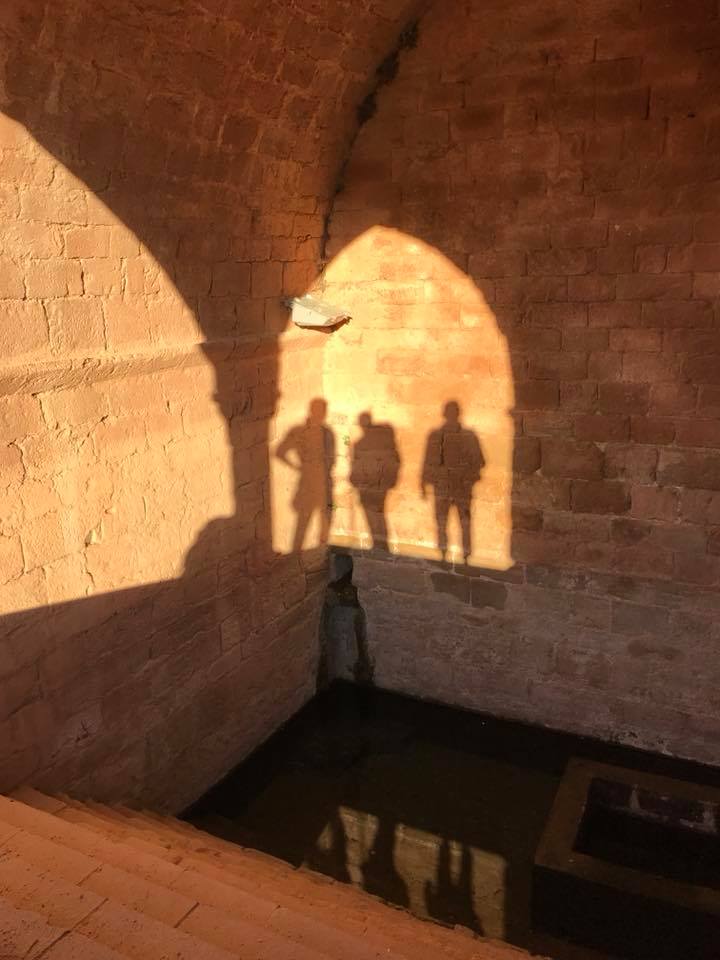 We reached Villamayor De Montjardín, the first and only village where we could stop for something to eat and fill up before going onto Los Arcos.  Needless to say that our stop was a little bit longer than we anticipated.  We were soon joined at the small cafe by three Spanish Doctors (two of them were both called Fernando – see luxury items section below).  Taha (from Lebanon) joined us and his treat for the day was fresh oranges that he gave to everyone.  Estella and Robert (the loved-up couple, who were still loved up), and Mr. Yun (good-looking Korean guy, who is smoking his way across Spain).  It was truly a little party at this cafe and I enjoyed every moment of it.  I think the best times of the Camino are during these catch-up moments at the cafes along the way.

A right pain in the rear end… literally!

As I sat down I realized that I had a niggling pain in my left buttock.  I think the constant walking and weight of Nellie (my pack) was a bit too much for my gluteus maximus.  I took two Ibuprofen and then had a brainwave that I would regret in about 10 mins time.  What was the brainwave?  I grabbed my first aid kit and headed to the loo.  I looked at the label on my small tube of Deep Heat.  It read “Deep Heat generates penetrating warmth in aching, injured and sore muscles” – perfect!  I was very generous with the cream as I smothered it all over my left buttock.  I could feel it working quite quickly and with a smug smile on my face, I went back outside to join the others.  Within two minutes I knew I had done the wrong thing.  My arse was on fire!  I put my pack on in silence, but I know my face must have been telling another story.  The smug smile vanished as my rear end burned with each painful step.  It did take my mind off the muscle pain though.  Perhaps the objective of deep heat is one of distraction? I never said a word, but it was a very uncomfortable walk for the next 20 mins or so.

A got a bit grumpy 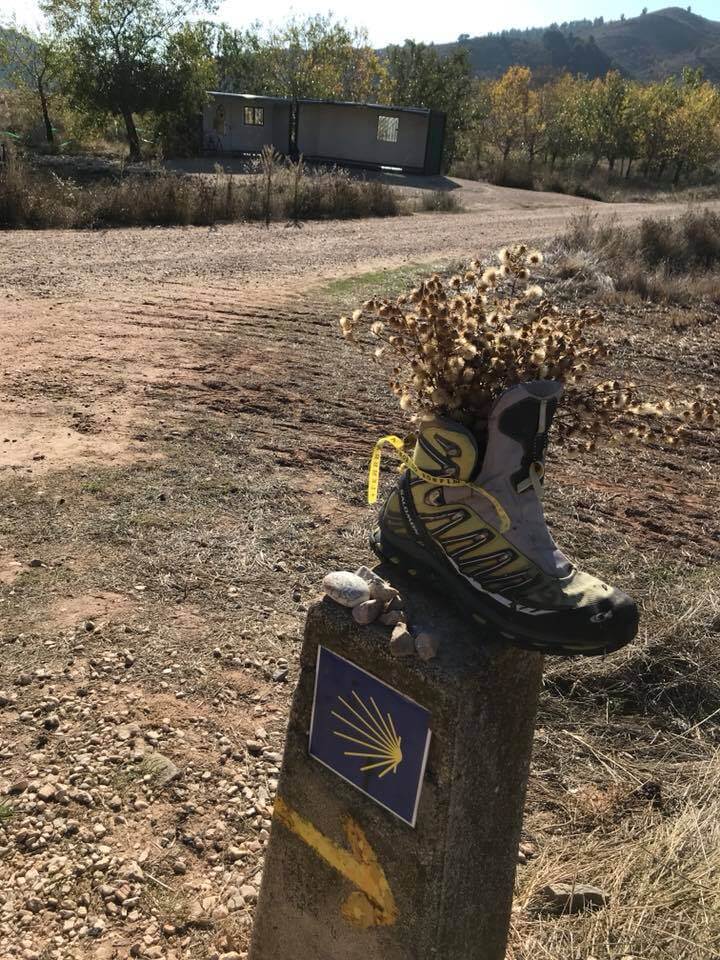 A perfect picture to symbolize my feelings today. The bar was closed and the flowers were dead. (Even these words are a bit depressing)

That was it for breaks.  We still had another god know how many miles to walk in the blazing heat.  After a few miles of walking along laborious open fields, I was starting to get a bit grumpy.  I was walking with Lou and Jaume, although they were in front of me.  I decided to plug my earphones in and take my mind off the trek by listening to a film.  Yes, I know that sounds a bit crazy, but I launched my Amazon Prime app on my phone and clicked play on “The Way” (a story about the Camino with Martin Sheen).  I have seen the film many times so I don't really need to watch it, just listen.  The music in the film is very inspirational and I more-a-less know the script.  This kept me entertained and lightened my mood as we entered the town of Los Arcos.  I really had had enough by the time we reached our destination for the day.

I was adamant that I was going to stop here for the night, along with most other pilgrims, however, Jaume and Lou were considering moving on to the next village which was only 3km away.  Starting 3km on tomorrow would make their journey to Logrono (one of the longest days of the Camino) much easier.  I left them deciding on what to do as I booked into the Albergue.  I joined them for a coffee, which was so much better now that I was free of Nellie (who seemed rather heavy today).  Lou and Jaume had made their decision and they were going to continue walking and stop at the next village. We said our emotional goodbyes and I joined Taha and friends for a cold glass of Sangria.

The church in Los Arcos was absolutely stunning.  I was keen for some “time out” and I headed over to the church whilst everyone else was getting quietly drunk on cold Cerveza.  I opened the door and discovered the church was completely empty.  I sat in the front pew and just absorbed the beauty of the place.  A sense of peace enveloped me and I knew I had made the right decision to stay here tonight rather than continuing with Lou and Jaume.  I was there for a good 10 mins or so when I felt a tap on my shoulder.  It was the priest.  I was that absorbed in the moment that I had not heard him approach me.  He asked me “how did I get into the church”? Which I thought was a rather strange question.  I replied “through the door” – thinking what else was he expecting me to say? He said, “The door is locked and the church does not open until 5 pm”.  Well, the door was certainly open when I came in.  He walked with me to the door and with a puzzled look on his face he said: “I locked the door myself, so I don't know how this happened”?  However it happened, I was truly thankful for this little miracle.  It was exactly what I needed.  (The video below shows the inside of the church).

MY MOOD AND FEELINGS – I feel rather drained today. The sun is very hot (must buy sun-cream tonight). I felt a tear come to my eye as I hugged Lou goodbye, knowing that I will probably never see her again.

THE ALBERGUE – €6 for my bed tonight in the municipal in Los Arcos. It seems clean, if not very basic. I’m not keen on the rubber mattresses, but I understand why they use them. I’m thankful for my silk sleep sheet! 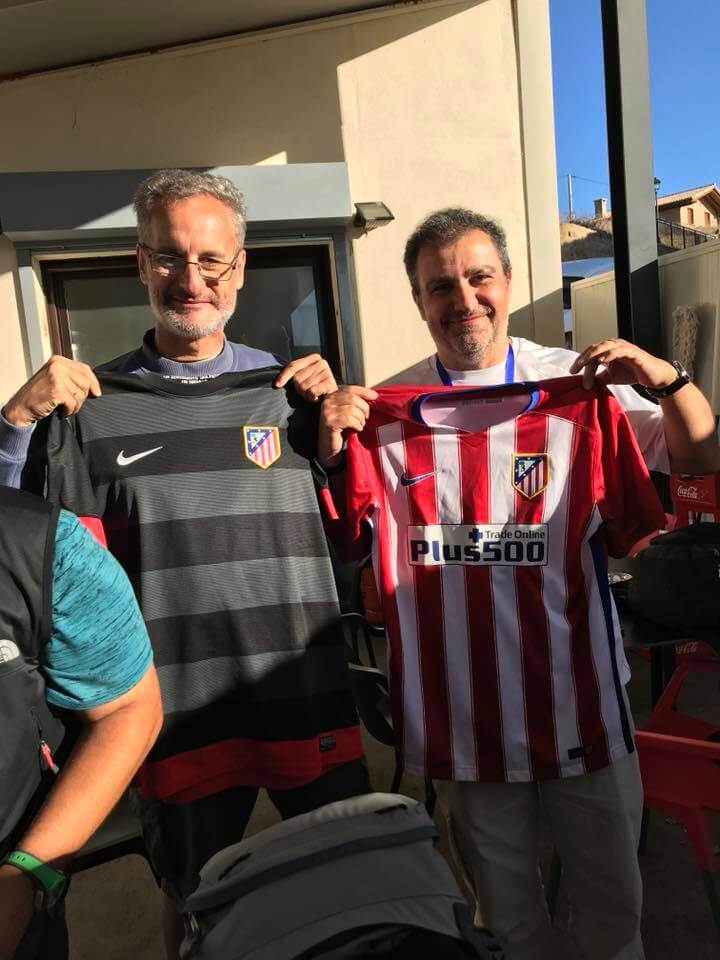 Each day I am taking photos of the people on the Camino and asking them “what is their luxury item that they have in their backpack”.