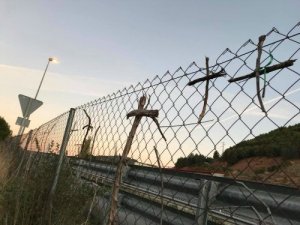 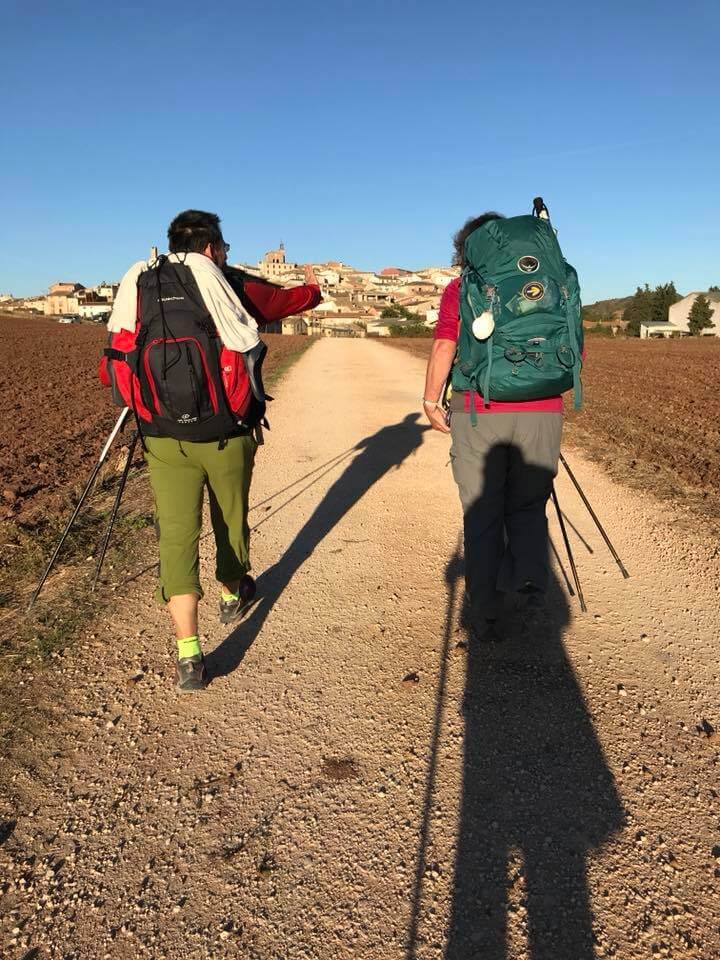 I slept well last night at Hotel Jacque.  Lou and I enjoyed a homemade breakfast of Nescafé latte and yogurts that we had purchased at the local supermarket last night. Julie's idea of taking these little sachets is brilliant. No milk needed!

We set off in the dark through the beautiful and very Spanish town of Puente la Reina. I love the buildings with their cute little flower boxes on the windows.  Over the infamous bridge (which the town is named after – Bridge of the Queen) and we are on our way. Yet again we were blessed with the sunrise over the mountaintops. This never gets boring!

In a thoughtful mood

I was in a thoughtful mood today so wanted to spend some time on my own.  I walk fast on an incline, so I found that I was soon in front of Lou.  I knew I would catch up with her at the next cafe a few miles away, so I carried on.

I arrived in the small village of Maneru for my first coffee of the day.  I was joined by Lou, Jaume and Taha shortly afterward.  Taha dished out some fabulous dark chocolate bite-sized chunks which went down well.

I let Lou and Jamie walk on as I spent today simply going very slow and just enjoying the walk. I hadn’t realized that I had been walking at quite a fast pace for the last few days. I was always on a mission to the next cafe or the next Albergue. I wanted to change that. The Camino is not a race.

Thoughts of lost ones 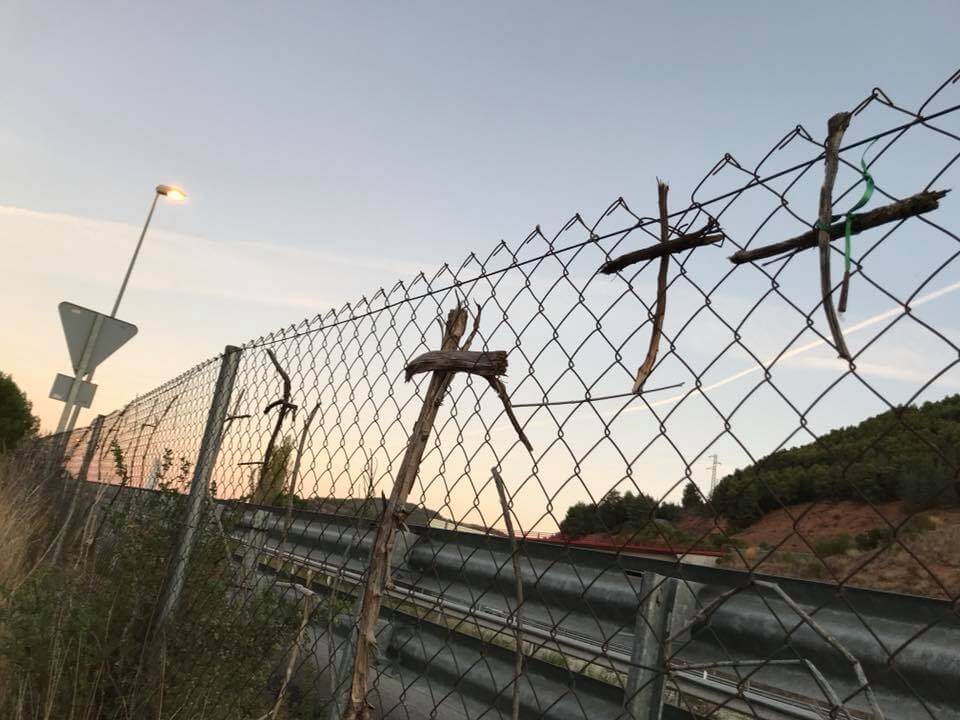 I laid a few crosses today.

I passed more “crosses” in the fence and I stopped to add a few of my own.  One for my Nan Doherty, one for Nan Stokes and one for Tim (one of my HGV drivers who passed away at the age of 42 a few years ago).  I'm not religious, but I found myself tapping my head and doing the cross sign over my body after I had created these little crosses in the fence.  It was a surreal feeling and I knew that they were with me.  I can't explain the peaceful feeling that came over me.  It was as if they had all lined up and given me a big hearty hug.

Another Camino tradition is to leave a stone on top of the Camino milestone posts.  It symbolizes leaving your worries behind.  I found myself thinking about people that I knew had some worries or problems in their lives.  I won't go into detail in the public domain, but let's just say that I left quite a lot of stones that day in the hope that this would somehow ease their pain. I've no idea if this worked, but I do believe that 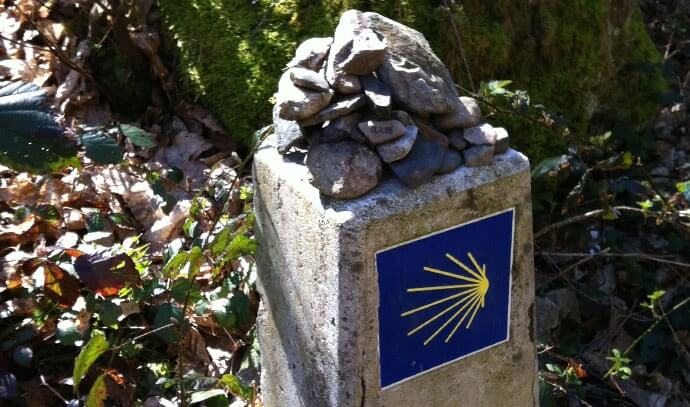 Leave your worries behind

all “thought” is hugely powerful, and I know that I certainly felt a lot better after each stone was placed.  A little bit of weight on my own shoulders was being released each time, and I'm not talking about Nellie (my rucksack).

I eventually arrived in the small village of Lorca.  This town was quite significant for me as during my last Camino my daughter Rachel had extremely painful feet and we caught the bus from this village to Estella.  After a quick coffee (and printing some photos for my little book), I walked out of the village and explored new land that I had not trodden before.  It was quite exciting and I loved every minute of it.

I love the Spanish people 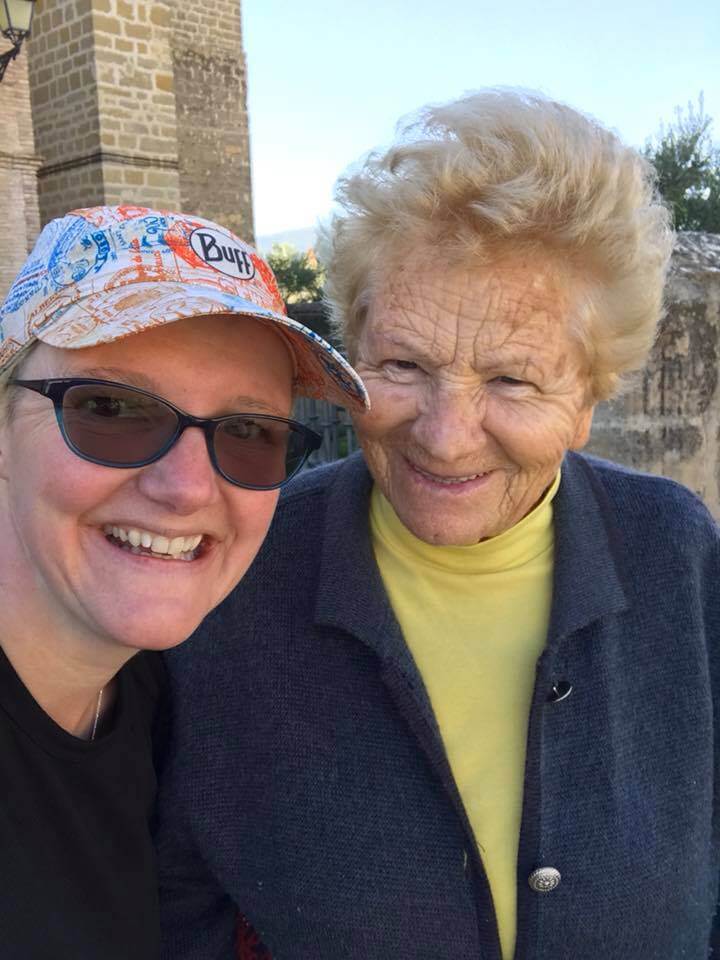 This lady gave me the biggest hug ever!

One of the best villages was Villatuerta.  I found myself wandering into the Church and an excited elderly Spanish lady was keen to see a Pilgrim in her church.  She started talking to me in very fast Spanish as she was pointing to various parts of the church.  With my limited Spanish, I simply said soy ingles, no entiendo (which I hope meant, I'm English and I don't understand).  She seemed to understand what I said and then gave me the biggest hug I have ever had.  She just loved her church and she adored pilgrims.  I stamped my credential (Camino passport) and left a donation.  She was certainly a highlight of the day for me.  As I left the church a fellow pilgrim (Jon Clair) was walking up the steps.  I stayed for a quick chat and wished him well.  I was on my way again.

I arrived in Estella

As I was about 1 mile from my final destination, I received a text message from Lou.  Jaume and Lou who was asking how far away I was.  They were on the outskirts of Estella and were trying to decide on which Albergue to go to.  They said they would wait for me.  I increased my pace and after walking by an awful smell (I thought it was manure, but later found out it was wine yeast smells) I trotted over the bridge into Esella.   Lou and Jaume were waiting for me and it was great to see them both.

Today I got to think about stuff and work my way through some decisions that I need to make for the future. I think I have more clarity now. 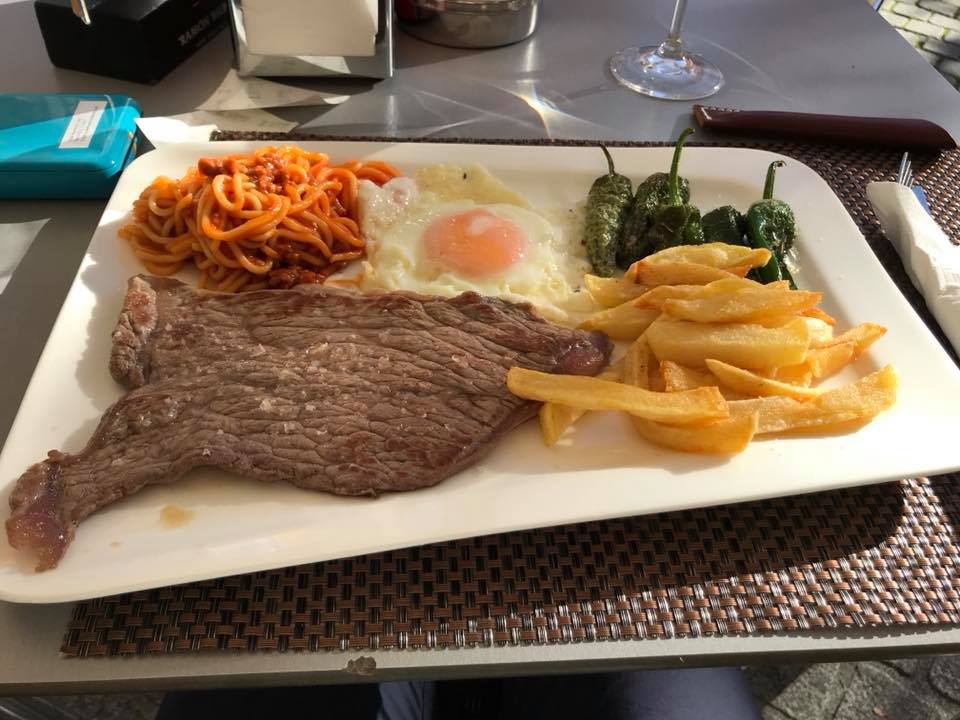 The weirdest meal. Look at the spag bol in the top left corner

Jaume and Lou went out to explore Estella, but I decided to stop in and write up my journal, do some washing and generally chill out.  Around 5 pm I did pop out to get something to eat which ended up being very random.  I sat in the main plaza in Estella and ordered a large glass of white wine and the pilgrim meal.  The meal consisted of steak (yummy), chips, roasted peppers, fried egg, and spaghetti bolognese.  Yes, I said that right.  They added bolognese on the same plate.  (see photo).  Very weird.

PLACES OF INTEREST. Last year we saw a huge world map which was made from hedges in a field. Today I got to speak to the man who created it. He was forced to remove it from the local government, which was sad. More churches were open and the hugs from the Spanish grandmothers who maintained the churches were plenty. I left each church with a smile on my face.

MY MOOD AND FEELINGS – I’ve been in a thoughtful and contemplative mood all day. It’s hard to explain, but there was a peacefulness around my soul today. I feel good! One of the best parts of the day was when I FaceTimed Rachel at a cafe, and then I finally got to chat with Matt tonight. I miss them both loads.

THE ALBERGUE – we are stopping in an old monastery that is attached to a church. It’s spotless with fresh sheets, pillowcases, and blankets. There are only 5 of us in our room so I’m a happy bunny! Bonus… power showers!!

HEALTH – my hips are sore from where my rucksack has been rubbing and my feet ache, but apart from that, I’m good!

Each day I am taking photos of the people on the Camino and asking them “what is their luxury item that they have in their backpack”.