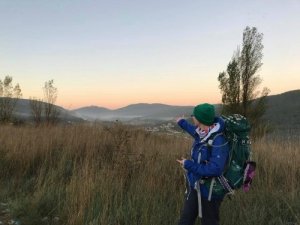 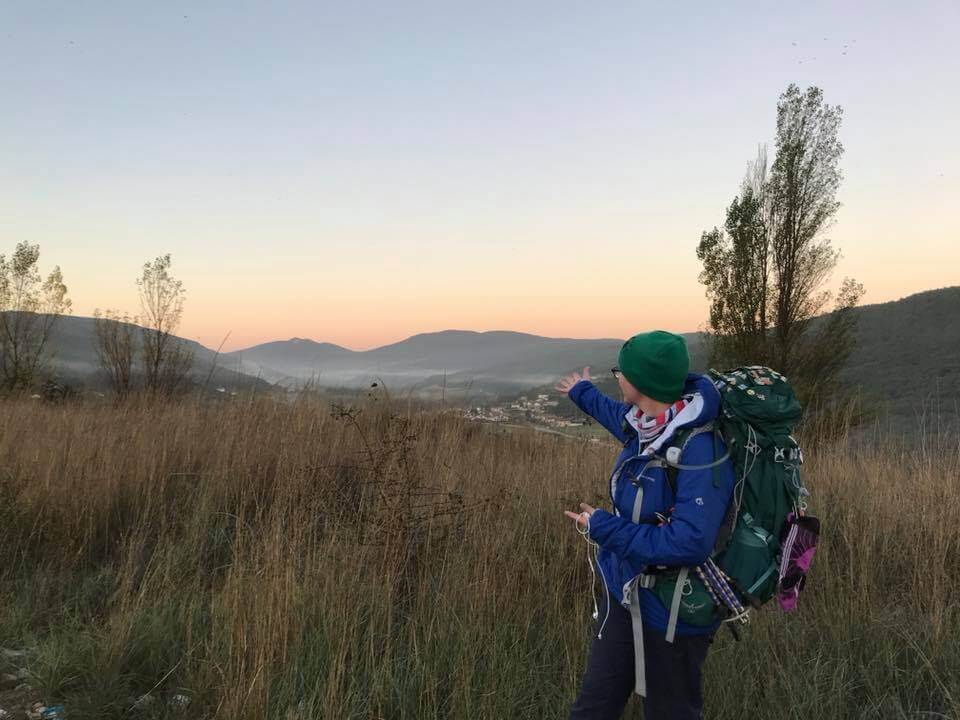 Watching the sun come up over the mountain tops

I think the breakfast routine is rather strange, but apparently, it is normal in Spain.  The landlord of our Albergue lays the breakfast out the night before.  He cuts up baguettes adds jam and marmalade and then covers in cling film (not too bad).  The strange part is that he also makes the coffee, the night before.  This means that the landlord can enjoy a lie-in and he doesn't need to be there to see us off.  Don't you think that is weird?  It meant that we had to pour cold coffee into mugs and then heat it up in the microwave.  It was not the best coffee!

Today I wore my sensible hat after yesterday's scary morning trek in the dark through the woods. Rachel would be proud. I waited for Lou (who has a good head torch) and set off from Zubiri at 8 am when it was light enough to walk.

A day with my new friend, Lou

Lou is a retired doctor from the UK and it was a pleasure walking with her today.

After a steep climb, we met up with a young Korean called Kim.  He was waiting for the sun to come up over the mountain tops.  We were in no rush, and I had promised myself to stop and smell the flowers, visit more churches and appreciate the scenery this time around.  This was an opportunity not to be missed, so we stopped to watch the sun come up over the mountain tops and it was breathtaking.  Little did I know that this would become a daily habit. 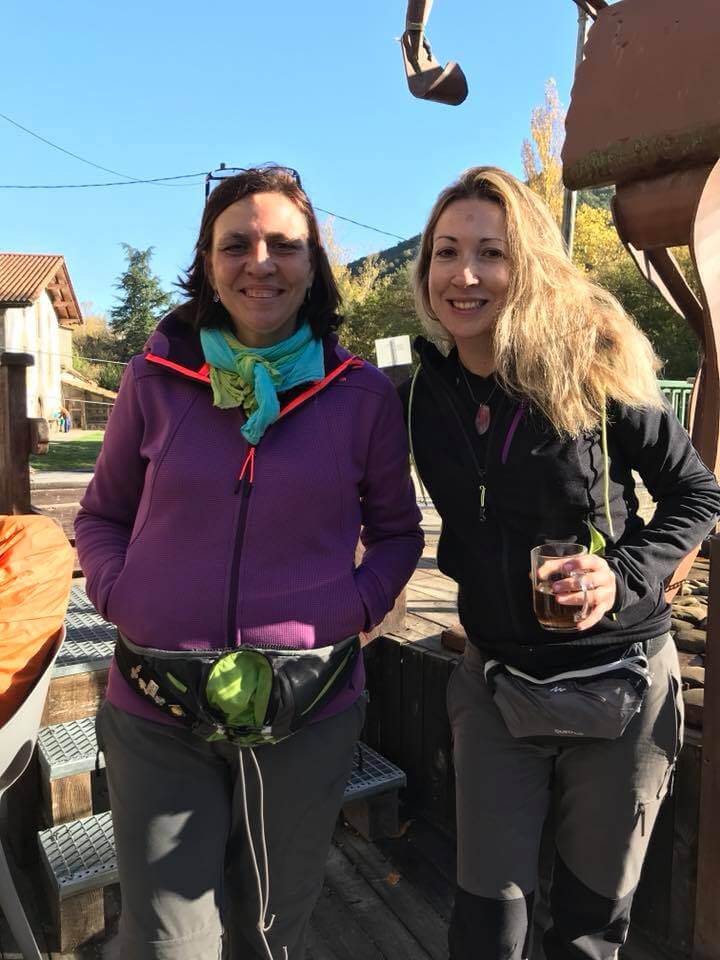 Mum and Daughter. It was Christina's birthday today and a fellow Pilgrim gave her the necklace that she is wearing.

Today's trek was one of discovery.  We stopped for coffee at a little cafe where you can take a selfie with their iPhone that is secured to the wall.  The phones are uploaded to their Facebook page at the end of the day.  Being a social media marketer in my day job, I think this is a cracking idea!  At the cafe, Lou and I sat with a mother and daughter who were enjoying some quality time together.  It was the daughters birthday and a fellow pilgrim had purchased a Camino necklace in the cafe shop and presented it to her as a present.  The Camino is like that.  The people are so generous with time, gear, food and a listening ear.

We watched Dan from Dorset and David from Arizona walk by slowly.  Dan had a limp as he had fallen over a rock on the descent into Roncesvalles.  He is the only pilgrim that I saw wearing jeans, but he had the smallest rucksack.  David walked at a similar pace, so I think it worked well for them.  They did not stop for a break at the cafe and just continued on by.  My motto is very different.  A cafe is an excuse to chat, make more friends and refuel your body with Cafe Con Leche or Vino!

Geocaching – it's got to be done! 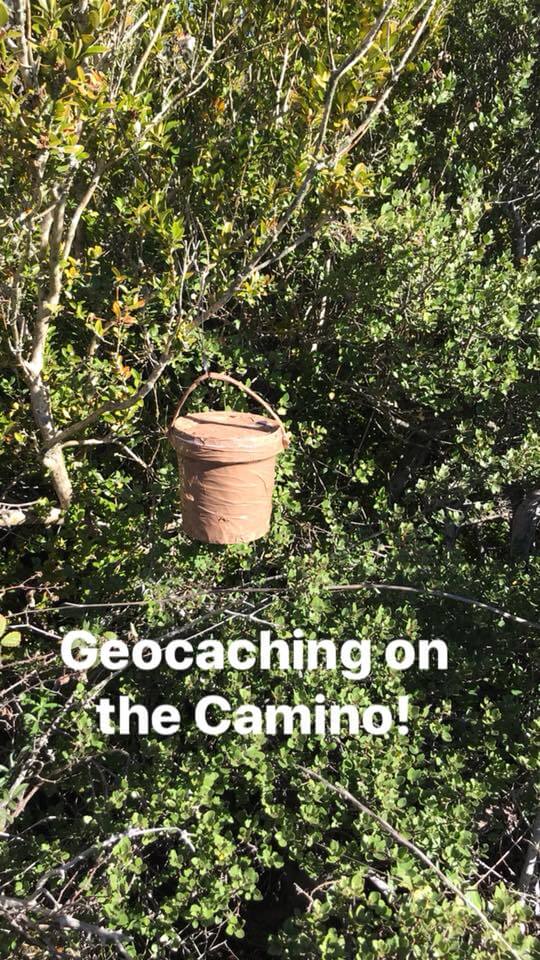 A sneaky cache hidden in some prickly bushes just off the trail.

All fuelled up we were on our way again.  Lou was curious about geocaching, so we spent the next hour or so grabbing caches on the trail.  Trying to translate the hints into English was a challenge but we got there in the end.  The group travelling today were new pilgrim friends Sanju & Kamal from Oz and Dan & David.  We would pass them, then stop and look for a geocache, and they would pass us.  The whole route into Pamplona was a bit like that.

One of the best memories from today's hike was a picnic by the river.  We ate cheese, crackers, bread and oranges by the river in Arre (A suburb of Pamplona).  I aired my feet before we took to the road again and made our final journey into Pamplona.   There is something unsettling about arriving in a busy city after the quietness of the small Spanish villages.  I enjoyed the old part of Pamplona and reminisced as I saw “Burger King” (last time I was here, Rachel got so excited when she saw the Burger King sign!).  The old walls of the city, the amazing Cathedral and pilgrims seem to flood the city.

Our Albergue is right by the Cathedral which is stunning. €3 for pilgrims.  I was keen to go view the Cathedral as I had not done so during my last visit.  Many churches were closed on the main route, which had been disappointing, but this one was impressive.  Pamplona is the same as any city and is very commercial.  It reminded me of London, but rather than red buses and telephone boxes, they had bulls and wineskins. 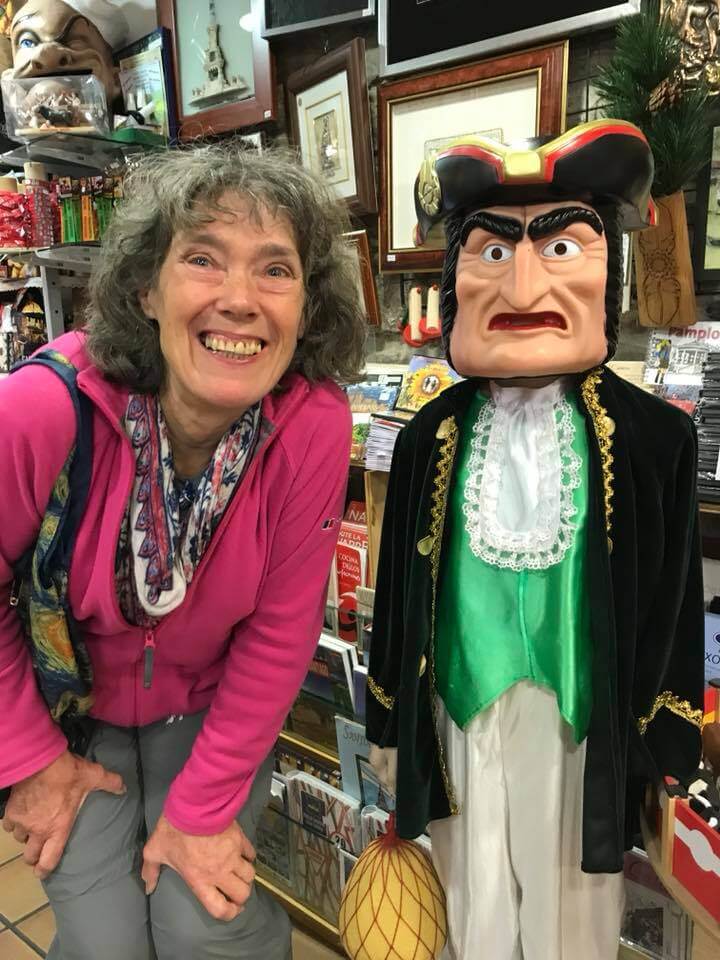 It was very cold this morning, but the sun came out and layers were soon peeled off. It was so nice to have a day without rain and to walk in dry socks/boots!  It is amazing how some people still thought it was cold and were wearing fleeces, whilst others were too hot and the shorts and t-shirts were out.  I found that those from hot countries thought it was freezing, and people from the UK seemed to think it was boiling.  I wonder how long it takes to climatise properly?  Certainly not the ten days that I had planned.

My mood and feelings today

I feel relaxed and very chilled out. My phone rang once (which I ignored), but no one left a message so I assume no one died. I’ve deleted the email app, so I’m not tempted to get sucked into work. Life is good. 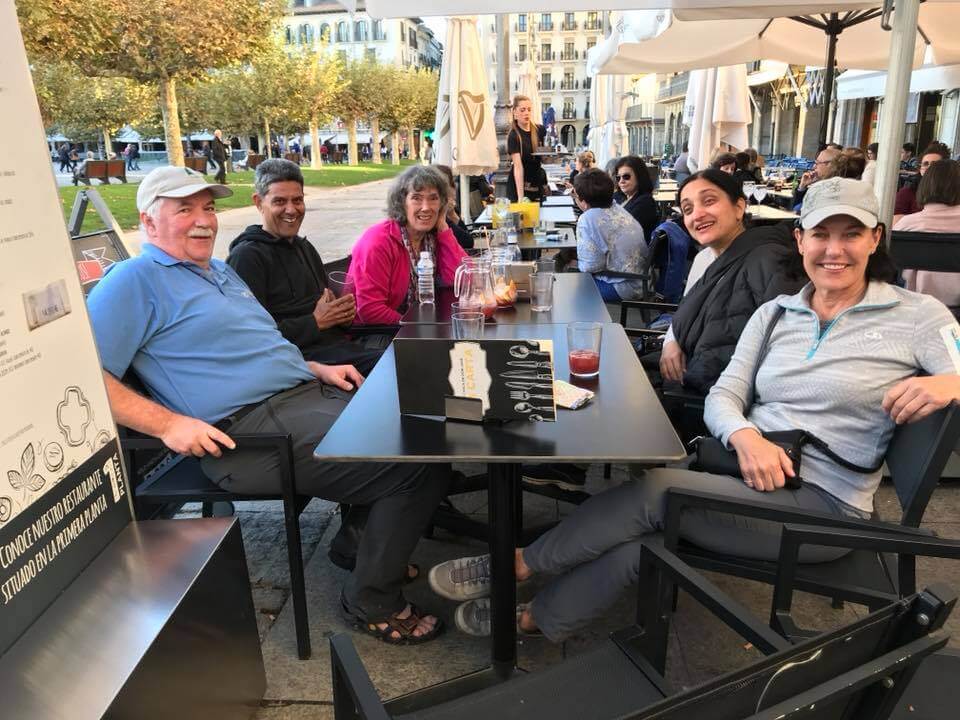 A few jugs of Sangria and I was ready for an afternoon siesta!

Our friends from India had 3kg of nuts with them that they were sharing out.  Lou, Sanju and Kamal tried Sangria for the first time which was amusing to witness.  We met up with most of our Pilgrim family in the main Plaza for drinks and a chat about our day and then dispersed back to our Albergues.  Lou and I went out for a Spanish meal in the evening, but we were not back late as there was a curfew at the hostel of 10 pm.

We stayed at the Hostal next to the Cathedral which chimed every hour.  Lou and I were feeling rather privileged as we had a four cubicle to ourselves and this included a little table in between our beds (such luxuries are few and far between).  The bed and breakfast (another cold coffee) ¢12 – so not bad for a central albergue in the main city.

Pamplona is a busy and beautiful city, but I’m looking forward to hitting the road in the morning.

The quietness of the Camino trail beckons!