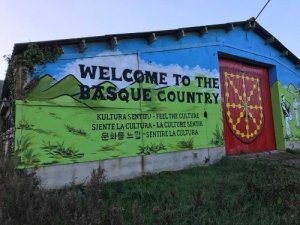 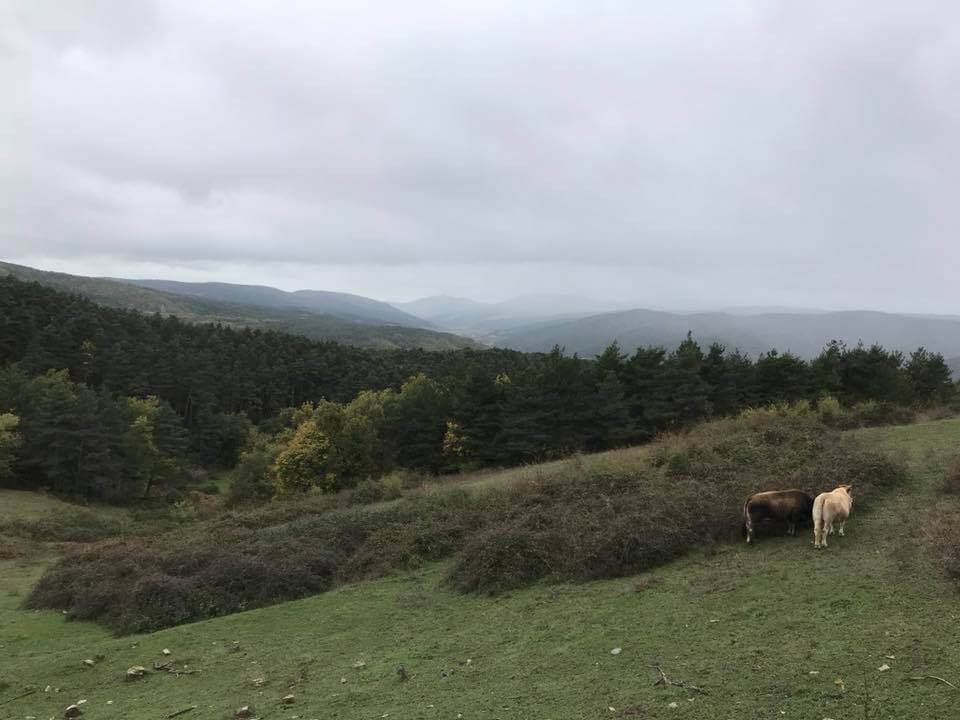 I wake up about 5.30am and head to the bathroom. The lady in the next toilet cubicle let’s rip and it seems to go on forever! I’m just hoping that no one thinks it’s me! Other people’s bodily functions are never something that I will get used to on the Camino.

The art of squirrelling

This morning I decided to try my best friends advice and experiment with a pilgrim technique that from now on will be called “squirrelling”.  One of the issues on the Camino is trying to pack everything away quietly whilst other people around you continue to sleep. If you read any of the Pilgrim forums then you will know that there is an absolute hatred for plastic bags and head torches.  It is impossible to be quiet and pack everything away unless you implement the squirrelling technique.

What is squirrelling? Julie's technique involves taking your bedding, clothes, Nellie (pack) into the communal area and pack everything outside of the dormitory. I felt like a little squirrel collecting nuts as this process took me several trips.  If you are an early bird like me then this system is brilliant!  After a few days, and more tips via Facebook messenger from the master of squirrelling (Julie), I was near to perfection by the time I had finished this trip.  Here are my top squirrelling tips (actually, Julie's top squirrelling tips).

In the morning, get out of bed, then roll up your sleeping bag and take everything to the loo with you.  Get washed and dressed and then take everything to the communal area to pack your rucksack.  You are then packing with the lights on, so no need for offensive head torches, and you can whistle and sign to your heart's content without waking anyone up. Genius! 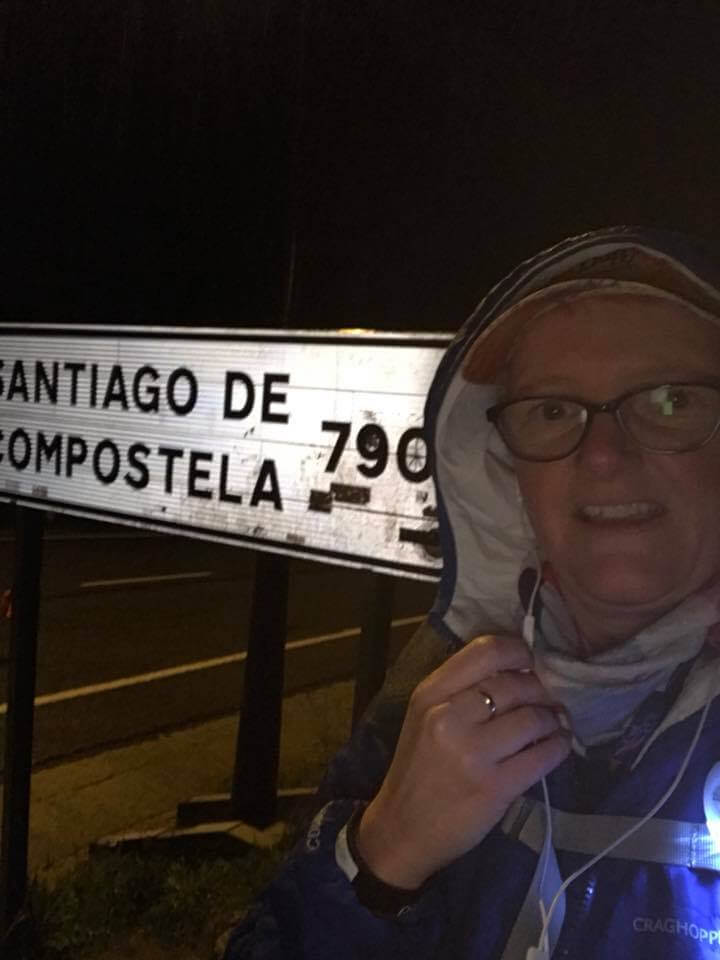 Ignoring my best friends advice of always making sure you can see someone in front of you and behind you, I venture out on my own in the dark in the pouring rain at 7.20am.

My Camino friends were having breakfast in Roncesvalles, but I decided to walk to the next town and grab a bite there (stupid eh?).  It’s not far I say to myself and I take my first steps into a wooded trail, after taking a selfie in front of the famous sign saying 790 miles to Santiago.  My little bike light attached to Nellie is utterly useless, so it’s time to get the iPhone torch out! (Note to self, bring your head torch next time!). As I get deeper into the woods, with no pilgrims in sight, my mind is starting to play tricks on me. I can hear “walkers” (Walking Dead Zombies) everywhere! I then scream as a pair of eyes is caught in my torchlight.  Perhaps it was a fox or even a  bear! My stride quickens and eventually, the wooded trail turns into a tarmac path and I see the welcome beacon of the cafe! Cafe Con Leche por favor! (And make it a double!).

Whilst in the cafe I spot a fellow Pilgrim called Taha.  He works in the aviation industry and is from Lebanon.  He can see that I am rather shaken and he patiently waited for me to finish my coffee and buy some food for the day ahead before joining me for the next part of the journey.   My new friend speaks fluent English, Spanish, French and everything in-between.  I vow to learn more Spanish when I return home.  We walk at a good pace and we are happily chatting away.  I find out about his family and what it was like to live in Beirut.  In front of us, we see a group of pilgrims in poncho's who had missed the arrows.  They were about 500 meters in front of us.  We yell and whistle and one of them turn around, but completely ignores our signals to say that the arrows were “this way!”.  Pilgrims can be like sheep sometimes.  Just because the person in the front thinks they know where they are going then everyone follows.  I discover later that this mistake, in the rain, cost them an extra few miles on their day.

As the weather gets worse and my boots are starting to leak water I see a familiar sight in front of me.  I see Lou and her trekking umbrella.  I met Lou  (from England) on that first night at the Orisson.  We soon catch her up.  Taha and Lou are both slow walkers when going up hill and there were many uphills today.  I slowly pull away from them, knowing that they were chatting happily with each other so I didn't feel bad by deserting them.

WEATHER – that fine rain that soaks you to the skin. The sun came out around 11.30am. Hopefully, that’s it for rain for the rest of my time here on the Camino! 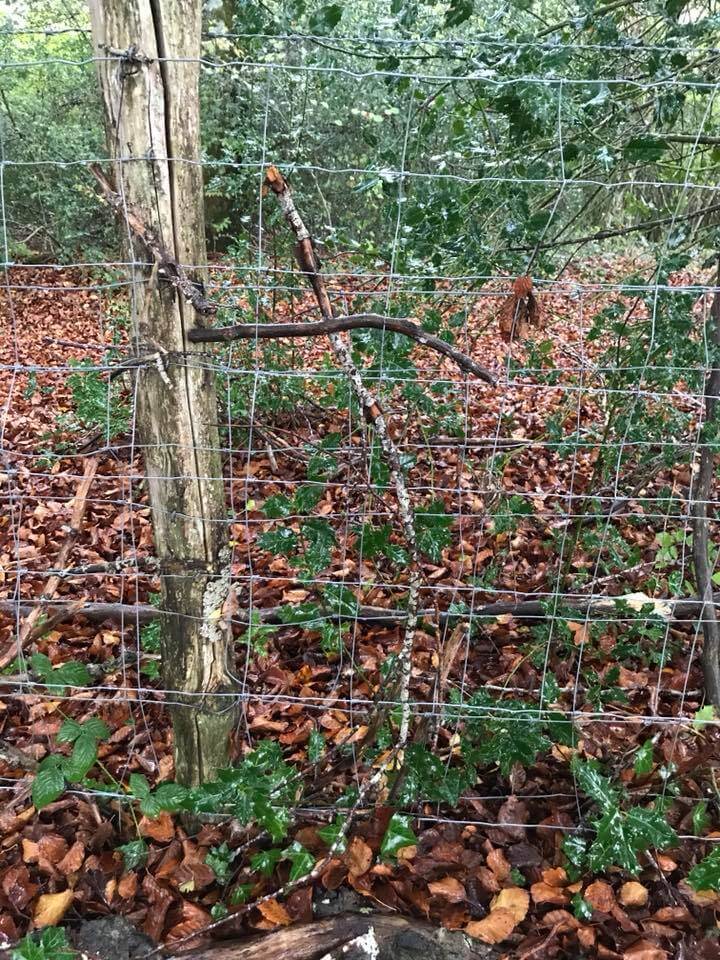 My cross that I laid for Phil Snelling who passed away last week. He was too young to die. Cancer sucks.

In some of the fences along the Camino trail, people have laid crosses with created by twigs. I find two sturdy sticks and lay a cross for a business colleague, Phil Snelling,  who passed away last week. I got quite tearful as I thought about his family.  He died way too young. Cancer sucks.  My “walking playlist” is full of thoughtful and deep songs. As Garth Brooks starts playing “If tomorrow never comes” I decide that I need something more uplifting. I change to my “running playlist” and “I can see clearly now the rain has gone” floods my earbuds. I soldier on to Zubiri in good spirits.

The final stretch into Zubiri is both breathtaking and quite dangerous.  There is one part on the very last descent that is very steep and I was thankful that I had my walking poles with me.  I had walked most of the day on my own and enjoyed the walk immensely.  There was one young Pilgrim called Roberto from Italy that I seemed to see the most.  He would stop and take off his jacket and I would pass him.  Then I would stop to take a photo of the beautiful scenery and he would pass me. We continued like that all the way to Zubiri.

After a stop at a cafe, I received an unexpected call from Julie.  I got rather excited to hear her voice.  She has an amazing memory and when I told her where I was she knew exactly what was coming up next and described it to me in detail.  After the call, I was on a real high and Zubiri was not far.  I was walking at a good pace and I knew I would be seeing the little river and the familiar bridge of Zubiri by lunchtime.

I love this Albergue. It’s the best yet. €15 including breakfast and the room has 3 people in it. My bedroom overlooks the river!  Quite a few people are staying at this Albergue.  Erik from Holland, Lou, Taha and a few others.  Erik, Lou and I decided to attend the pilgrims mass, but we struggle to find the church.  In the town square, Erik asked a driver of a van (who happened to be the owner of our Albergue), “Where is the church?”.  The landlord howled with laughter and we didn't get what he was laughing at until he pointed behind him.  We were standing right in front of the church!

We walked right to the edge of the town (about half a mile) for our evening supper.  I introduced everyone to geocaching whilst we were walking (there was one hidden right outside the restaurant).  The meal was superb.  We had a large table and were joined by Sanju & Kamal (from Australia, but Indian by birth), and Daniel from England and David from Arizona.  It was a long, three-course meal and lots of wine.  Sanju and Kamal are limited on what food they can eat as they do not eat meat, fish or eggs.  But they discovered veg soup and I believe they had a rice dish.   We all staggered back to the Albergue with full bellies and a slight glow from the red wine!