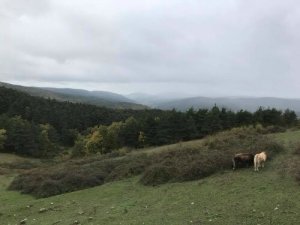 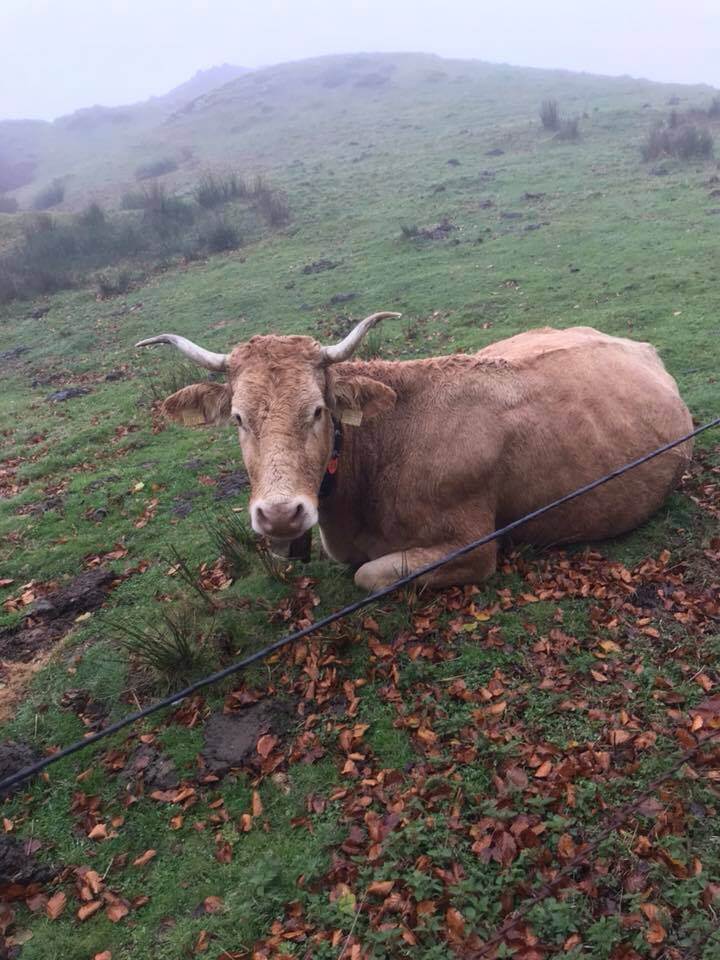 So last night was not too bad. I’m a light sleeper so anytime someone went to the loo or farted then I was awake in an instant.  I found the snoring rather therapeutic. I’m weird like that.

Today we are heading to Roncesvalles. I’m going to plug myself in and also take the slightly longer route to avoid a slippery downhill trail (that’s the plan anyway).

I've decided to track my miles on my Apple watch.  I have no idea why I didn't do this before.  You would have thought that someone who loves her gadgets would have been the first person to track where she is walking on Strava, but I completely forgot.  Anyway, from today onwards I will record the distance.

The Pyrenees in the rain

I set off with Walter and Fred (the two German guys that I met last night).  Everyone else seemed to take ages to get ready, but I was raring to go straight after breakfast.  Breakfast was not as exciting as yesterday's evening supper.  It was a bowl of coffee (yes, they drink out of bowls, not mugs or cups), with bread and marmalade.  There was an option of orange juice if the coffee was not to your taste.

8am and I can't wait to get going.  I know that today is going to be quite a tough day, especially as rain was forecast.  We walked for about 2 miles before we felt the first specks of rain on our cheeks.  Before long we decided that it was time to get the rain gear on.  My gear involved an Osprey raincover for Nellie, and a Craghoppers compression jacket, including hood to keep the wind and rain out.  Fred and Walter had very sexy poncho's that made them look like huge turtles, but they seem to work quite well.

The above video was taken on the French/Spanish border.  The only English song that these guys knew was “When i'm 64”.  All the way from the top of the Pyrenees (some 1300 meters), we sang “When I get older, losing my hair, many years from now” la la la…  Spirits were high as our skin became more and more drenched.  The clothing only held off the rain for a few hours and we were soon walking in squelchy socks, freezing cold hands and soaking wet bodies.  There were no cafes on the route and the only shelter was a small hut.  We decided to stop for some lunch in the sheltered hut before we began our decent into Rencesvalles.  I started to shake as I was so cold and wet.  I changed out of my wet gear into a clean and dry tshirt (Fred and Walter turned their back), and I was soon feeling better. 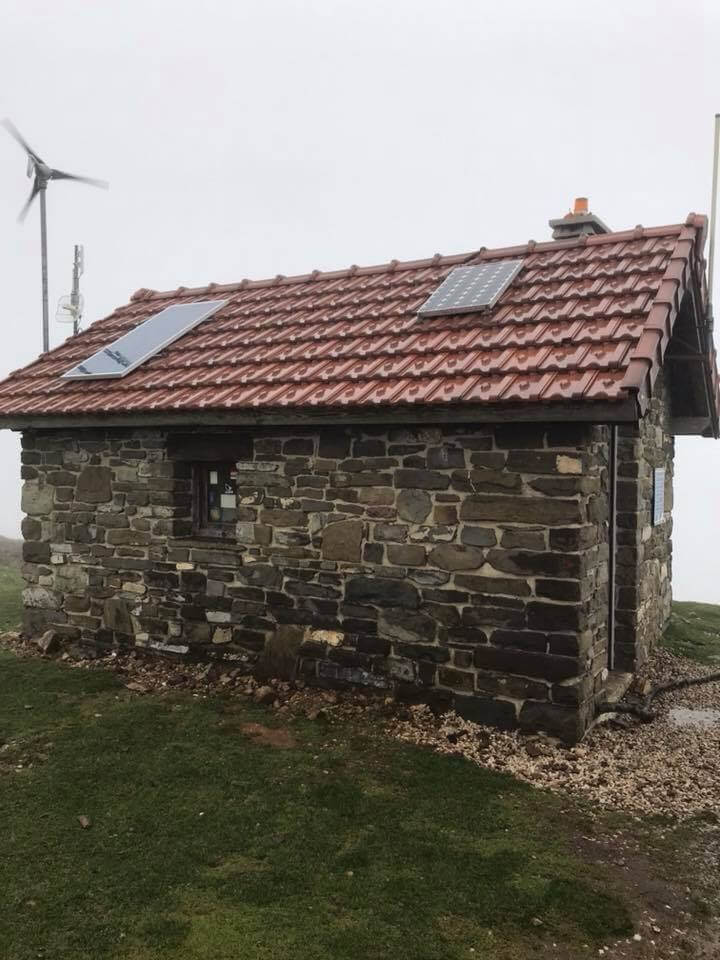 The hut where we had lunch

We had a fabulous picnic of sandwiches, fabulous goats cheese, sausages and then in typical German styles they broke out cans of beer.  So there I was, sitting in my wet knickers, drinking beer and eating cheese with two 64-year-old German fellas.  Life can't get better than that!

Just before we were about to leave, in walked Jon Clair who I met last night, along with Michel from France who had three gorgeous alsatian dogs with him.  Michel became quite a character on the Camino and you will hear more about him and his story later in the blog.

The decent into Roncesvalles was long but easy.  We kept a good pace and the old Monastery was in sight by 1pm.  Not that many people had passed us on route so we were one of the first to arrive.  We all changed into dry clothes and then grabbed a hot coffee to warm up.  This albergue is one of the best on the whole trail.  I was looking forward to a hot shower a bit later, but for now I needed to spend time with my new friends (Fred & Walter) as they were catching the 3pm bus back to St Jean where their car was parked.  They were heading home today.  They were both looking forward to seeing their wives, but would also be sad to leave the Camino behind. 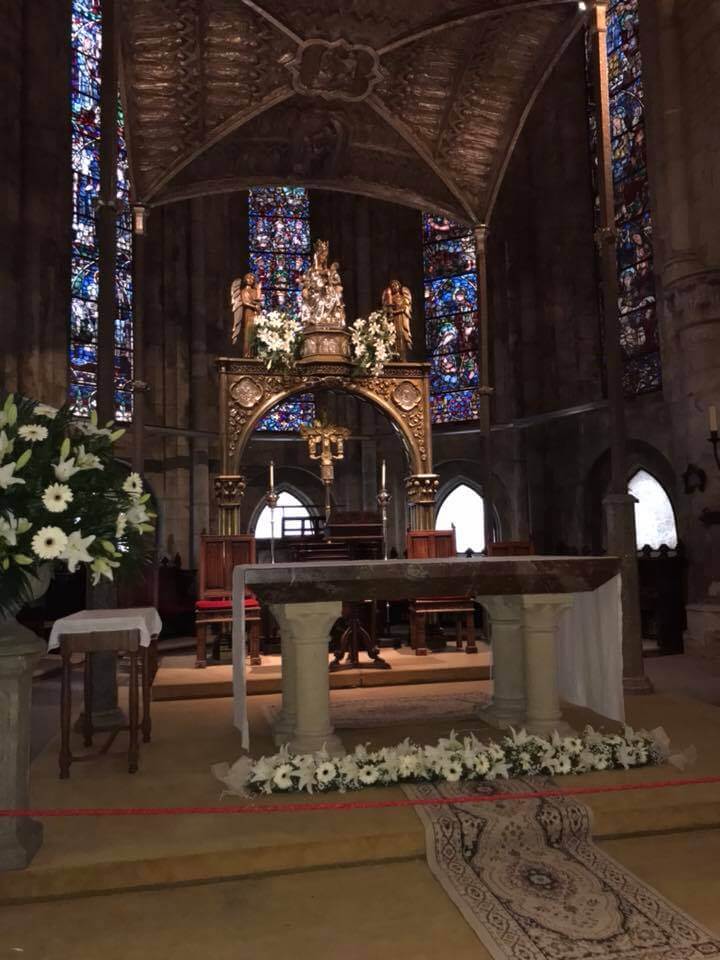 This is where Fred played his harmonica for me.

Before they left, Fred wanted to play his harmonica for me.  This was something that I will never forget.  He only ever plays this little musical instrument in a church as he says that it provides the best acoustic sound ever, and he was right.  We entered the church which was lit only by candles.  I sat in the 3rd row next to Walter as Fred made his way to the main altar.  He took a deep breath and played such a beautiful tune it took my breath away.  I was flattered that he asked me to come and listen to him play.  It was a true Camino gift.

There is nothing in Roncesvalles with exception to a church, a few albergues, and two restaurants, so I was surprised to notice a Tourist Information Office.  I trundled up the hill to visit the little shop, purely out of curiosity and I was also searching for a Roncesvalles Pin Badge for Nellie.  The Spanish guy behind the desk was very informative.  He spent a good few minutes giving me a lesson on how to pronounce Roncesvalles before pointing me in the direction of the gift shop.  There was a gift shop?  How did I miss that?  Tucked away, just before the hotel was a gift shop that sold all sorts of Camino and trekking type of gear.  In my mind I could hear Julie and Alison (friends of mine) saying “you don't need any more gear Julia” and they were right.  I settled for a Roncesvalles pin badge for Nellie, which now sits proudly on her lid.

Our restaurant for the pilgrim meal.

I really enjoyed the Pilgrim Meal in Roncesvalles was HUGE!  Pasta and soup for starters (yes, both), and then chicken or trout for main course.  We had the flan thingy again, which tasted like cold mush, but it was washed down by a few glases of red wine.  We had ten of us around tonight's table.  This included a few people from our first night, plus some new pilgrims that I had not yet met.  Dan from Dorset and David from Arizona.  It was a great night with lots of laughter and too much wine!

One of the best things about this particular albergue was the spin dryers in the laundry room.  Getting your clothes dry is always a pain and its embarrassing hanging your washed undies on the back of your rucksack during the day.  My clothes are drying and my walking boots and gloves are full of newspaper. I am praying that they will be nice and dry by the morning.

The showers are hot and I stay under the steamy water for much longer than I should have done.  It was one of those press the button for 60 seconds of hot water showers.  I kept telling myself “just one more push of the button and then I will stop”.  This went on for at least ten minutes.

I’m in a cubicle of 4 beds, with three people. There are me and a French couple who are all lovey dovey.  He is in the bunk above me and she is on the upper bunk opposite me.  About 9pm she gets out of her bunk and climbs the ladder to join him.  Talk about being a gooseberry or 3rd wheel.  I plugged in my earphones and just hoped that the bed didn't start to move.  Luckily, I was that tired that I soon fell asleep!

Tomorrow we are off to Zubiri, and I am hoping for better weather.