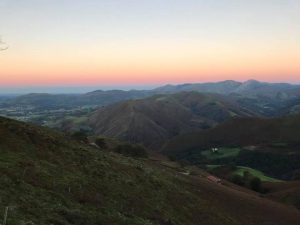 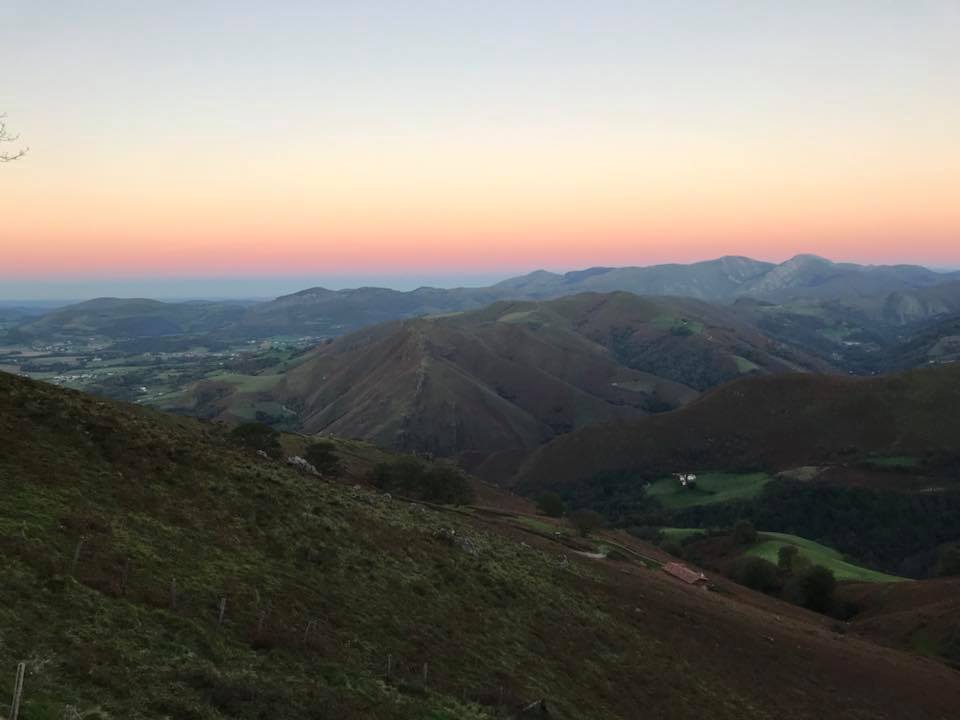 Views from the Orisson Albergue

After a restless night in the hotel room, I have a quick shower, dress and head down for breakfast.  I leave Nellie in the hotel lobby and grab myself a coffee.  I am struggling to digest the toast and marmalade as I am way too excited about the journey ahead of me this morning.   My train leaves at 7.45am and gets into St Jean at 8.58am.  I have trodden the exact same route in May 2016 with my daughter and best friend, so I am feeling confident this morning.  This was the easy bit!

Also having breakfast at the hotel are two people from Brazil. I see their rucksacks with a Brazillian flag and walking poles.  In pigeon English, I say “Camino?” – they excitedly respond si! si! I say that I am getting the train to St Jean, and they said that there was no bus from here to St Jean until later this afternoon.  They were getting the bus.  I showed them my ticket and they look disappointed that I was going on a train and they had to endure a bus ride that went around the houses.  It was a bit strange that they also arrived at 8.58am though.  I take a walk to the train station and try to figure out what platform my train is leaving from.  There are no signs on the boards, so I ask one of the guards.  In French, he said “Autobus” and points to the front of the station.  So my train ticket was actually a bus ticket!  Two smiling, very excited Brazillian's sat next to me and talked all the way to St Jean.  Their enthusiasm was quite contagious. 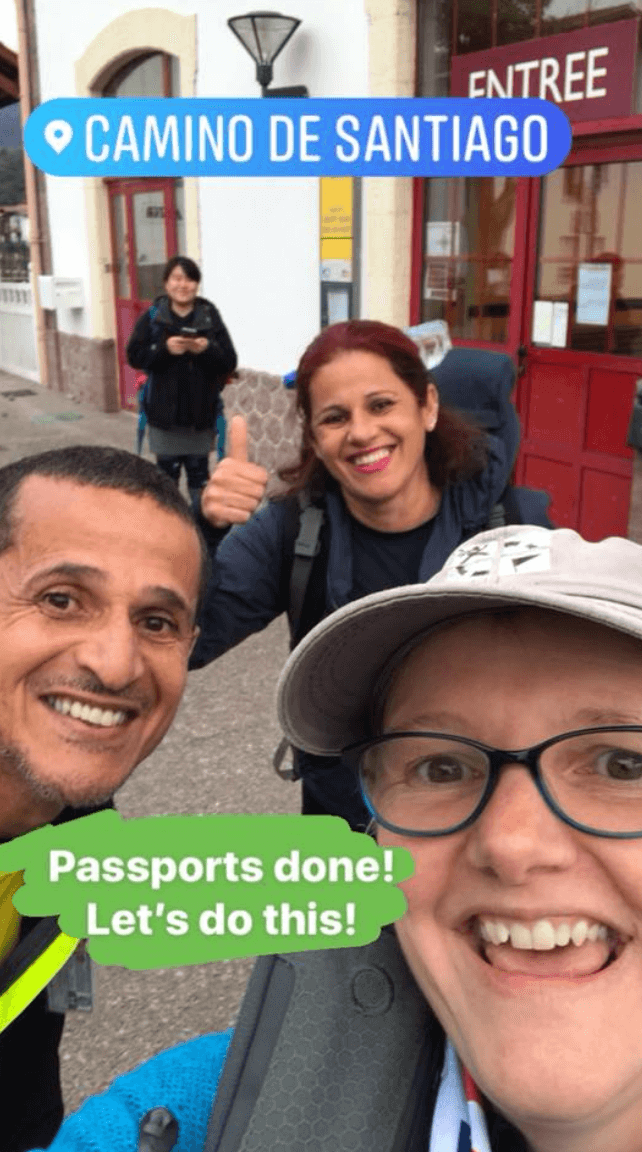 The two Brazilians (brother and sister).

As the bus pulled into the train station at St Jean Pied De Port I acted like the pied piper.  Mainly because I knew where I was going, so everyone followed me like little lemmings.  I headed straight to the Pilgrims office to grab my brand new credential (also known as the pilgrim passport). The pilgrim passport is your ticket that allows you to accommodation in the Albergues (hostels), and you also benefit from many discounts at restaurants, cafes, churches and shops.  The idea is that you get your passport stamped at each hostel, cafe etc and then you present a completed passport at the Pilgrims office in Santiago in order to receive your Compostella (a certificate to say that you have walked the Camino).

With my passport safely tucked up in Nellie, and my new best friends (Jasin and Tanya the Brazilians – pictured right), it's time to hit the road.  Or actually, it was time to hit the Pyrenees.  We walk over a very quaint bridge and head off out of the small town following the yellow arrows.  Almost immediately we are walking at a steep incline and memories come flooding back from last year.  I had forgotten how tough this first day was!  By the time we get to the first cafe, which was only 3 miles in (but also 3 miles up!), I was ready for a break.  Jasin was an ultra-marathon runner, so he was keen to keep going.  They were also walking all the way to Roncesvalles today, so I wished them well and let them carry on.  I took my pack off, and headed into the cafe for a much-needed coffee!  To my horror, it was all closed up.  No-one was around.  I took a swig of lemon water from my camelback (hint: take a Robinson's Squash'd to bring life into dull boring water) and marched onwards and upwards (literally!).

My friends had not got far as the sister (Tanya) was not a fast walker.  They were standing at a signpost and debating whether to go up over the mountain along a rocky track, or continue on the road and go round the mountain which was longer, but not as hard.  In the end I made the decision for them.  Let's take the short route – up and over!  It was hot, and the scenery was amazing.  We met some characters along the way.  The most memorable was Denis from Russia.  He was cocky and was making a video of his Camino experience.  He got everyone to sing a song as we “Show me the way to go home, i'm tired and I wanna go to bed…”.  But it kept us all in good spirits and we soon reached the Orisson hostel which was where I would be staying for the night.   I glanced at my watch and it was only 12noon.  It had taken me just over two hours to walk 6 miles, up and over a mountain with 20llbs strapped to my back.  I felt good.  I felt really good.  I deserved a glass of wine!

The Orisson is a very special albergue and I would recommend anyone to stay here.  Mainly because the views from this hostel are the best on the whole Camino, with vultures and eagles gliding through the air and the cute sound of cowbells in the distance, it's just a lovely place to stay.  The wine is fabulous, the rooms are clean, the hoteliers are very friendly and helpful and above all, they have the best pilgrim meal. 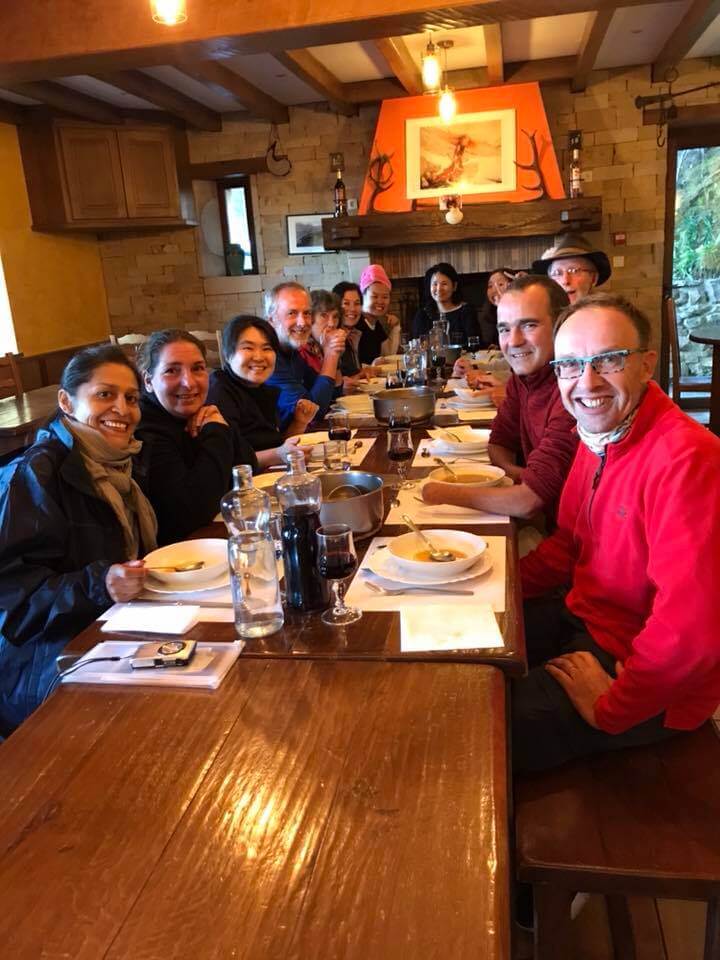 Our Pilgrim Meal at the Orisson Albergue

You get fed well on the Camino if you are a meat eater and don't mind carbs.  A pilgrim meal is usually a starter of soup, paella or mixed salad, then the main course of chicken or fish with chips or potatoes, and then a desert which will be fruit or flan or yoghurt.  I did chuckle when I saw a picture of a banana on one of the pilgrim meals for dessert.  (Not sure why I found that funny?).

Anyway, tonight's pilgrim meal was vegetable soup and bread, followed by fried chicken and cream caramel flan thing.  After the meal, it is a tradition to go round the table and say who you are and where you are from.  I was a little shocked when the first person that talked also went into the reason “why” they are walking the Camino.  Usually, the “why” is something very personal and is not something that you share with a bunch of strangers, especially on your first night.  But once the first person started, then everyone followed.  The stories of the evening made my heart very heavy and I actually had a tear in my eye as a few of them were so painful to hear it was heart-breaking.

Here are a few characters that stood out for me: 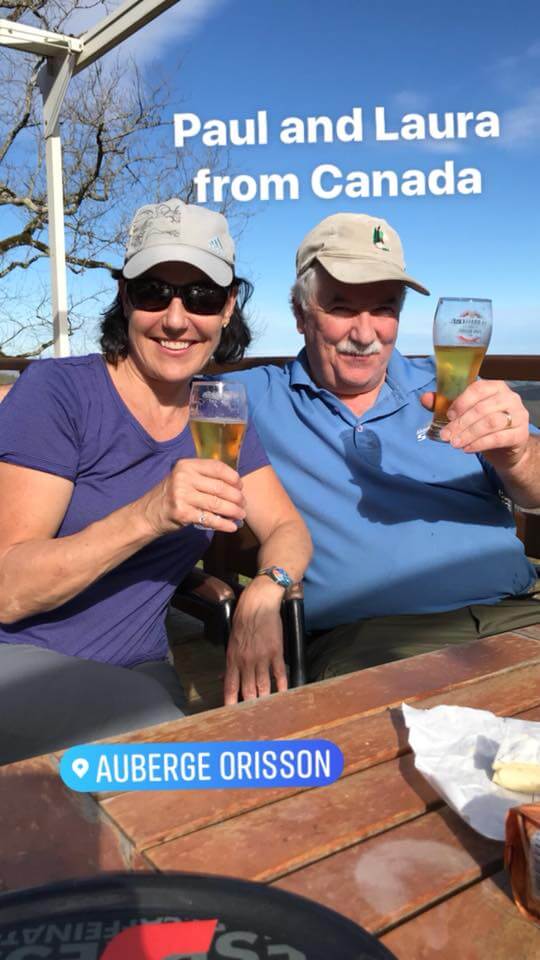 Laura and Paul – who were from Canada.  Paul described their relationship as “friends without benefits”.  This couple became close friends of mine over the next 10 days.   Laura has a spiritual side to her that I warmed too.

A Korean lady who did not speak much English had to have her “why” translated by an Austrailian lady (who was Korean by birth).  We all knew that it was going to be bad as she had trouble getting the words out due to the emotion in her voice.  Translated, the reason she was walking the Camino was that she needed to find a reason to live.  I can't remember everything else that was said, but the sadness in her eyes was so deep, you just wanted to hug her and tell her everything will be ok.  She was only in her 20's.

Another lady from Italy had lost her mum 12 months previously and was looking to get rid of the pain that she felt everyday.

Lou from England was just enjoying some time to herself.  Time for thinking and reflection.  A retired doctor who lives in Devon. She knows how to live.  At 65 years old she is still a surfing dude! I loved Lou.  She just said what she thought and there was no hidden agenda.  I walked with Lou on may days.

Erik – I got to know Erik from Holland quite well over the next few days.  He is the type of character that lights up a room when he walks in.  His job is to teach people how to be creative.  He was walking to Santiago and then meeting his wife who was then joining him for the final week of the journey to Finestere.  More about Erik in future blogs.

Fred & Walter – two German guys who had known each other since Kindergarden.  They had already been walking over a month through France and tomorrow was their last day.  They had both married sisters and they argued over who got the best girl.  More about these guys tomorrow.

Jon Clair – Jon was sitting next to me and he had also been walking for a month or so already.  He was on his way to Santiago and had been camping in a small tent up until now.  He had sent his tent and camping gear on to Santiageo as the cost of the Albergues were so cheap in Spain. He was on a budget so did not really stop at the cafes on route and had queit lunches of bread, cheese and ham picnics outside churches on the way.  A quiet natured man with a big heart.

We finished the night by playing spoons rather loudly!

Each day I am taking photos of the people on the Camino and asking them “what is their luxury item that they have in their backpack”.  I am printing these out into a small book that is being passed around.