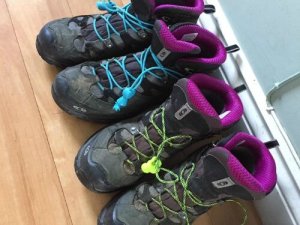 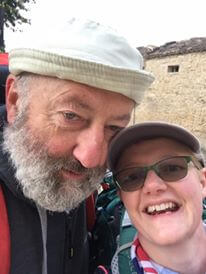 The Polish Priest who knew very limited English. Ola Manola Blues Coca Cola! These were the only words he ever said!

The night at the Municipal in Los Arcos was eventful.  I remember waking up in the middle of the night and the Korean lady on the bunk opposite slept with her legs in the air!  I wish I had taken a photo as it was the strangest sight!

After hearing the donkey wake up calls, we set off in the dark to the local cafe.  I had my usual cafe con leche, and a pastry and Rachel ordered agua (water) and a chocolate filled pastry.  We needed our energy today.  To be honest, I was still coughing badly and had phlegm on my chest and snot oozing out of my nose which was now very sore.  I was beginning to look like Rudolph!  But we had 17 miles (28km) to walk today and I was ready!

Each walk is split into cafe stops.  Toady we knew we would have just two stops.  One at Torres del Rio which was a delightful village with steep and narrow streets containing large Baroque houses with decorative coats of arms. These are protected by the church of San Andrés. 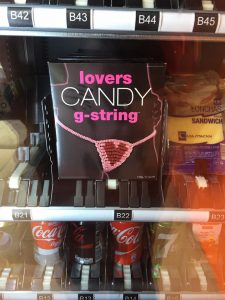 The 2nd stop was at Viana.  I wish I could say that Viana was a gorgeous town but I actually found it quite grotty.  We stopped at the very first cafe and had a coffee with fellow pilgrims Anita and Lars (who were staying here for the evening and then travelling back to Sweden the following day).  Also at this bar was Carmel (from Israel) and the friendly giant Jason from Virginia.  Nearly everywhere in Spain you will find vending machines.  They sell absolutely everything.  We were sitting at this quiet cafe and suddenly we heard a roar of laughter from around the corner, closely followed by “You've gotta love the Europeans!” in a deep southern accent.

Curiosity got the best of me and I went to investigate.  Sure enough, the vending machines were selling EVERYTHING.  From Candy love knickers, vibrators and even some things that I had no idea what they were!  It was a “Sexy” vending machine! 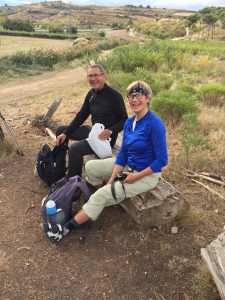 Anita and Lars from Sweden – it was their last day today.

Still feeling exhausted and very run down with this cold/flu, I made the decision that we would get the bus to Logrono and catch up with everyone at the municipal.

There are consequences if you take the bus!

Some people frown on you if you decide to get the bus, or perhaps send your pack on to the next Albergue.  It is said that “You are not a true pilgrim” if you cheat the system.  In my heart of hearts, I knew that I just needed to get better as quickly as I could, and if taking the bus meant that I could get a few hours extra rest then this would be better in the long run.

Rachel and I arrived in Logrono around 1pm.  We had absolutely no idea where the Albergue was.  This was a BIG city.  A bit like landing in central London and then looking for a hotel, when you don't speak the language.  In hindsight, I should have looked for a taxi, but we didn't!  We just kept walking and looked for yellow arrows!  In the end, I decided to try my limited Spanish on some passers by.  “Dondes Esta Albergue por favor?” – I must have been saying it wrong as people just shook their heads at me.  Panic was slowly setting in as we had now been wandering around the city for over 1hr and we had no idea where we were or where our hostal was.

The Camino will provide

Rachel and I obviously looked like lost pilgrims as a little old lady walked by and said “beun camino”.  I waved and said the phrase that I thought meant “where is the albergue please”.  Now, it's one thing asking something in Spanish and being proud of yourself that the person understands y 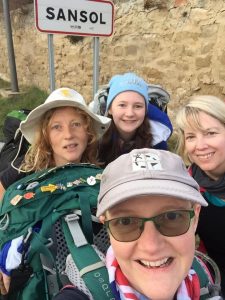 Me, Julie, Rachel and the lovely Lesley from New York.

ou, but when they reply in Spanish with a whole load of directions that you don't understand it can be quite daunting!  I knew left and right and “straight on” but apart from that I was hopeless.  We thanked her and started walking off in the general direction in which she was pointing.  We were obviously going the wrong way as she started waving and yelling across the busy street at us.  It was a bit embarrassing, but we watched as she crossed the road, and then gave signals to follow her.

She walked for a good 20 mins across this huge city to show us where our Albergue was.  From the broken Spanish conversations, it turned out that she had volunteered as a Hospitalier many years ago and she loves the Camino.  She made dresses for a living and now she was retired.  I was so thankful.  She didn't have to do that and I am sure she had better things to do with her time.  I gave her a huge hug (which I don't think she was expecting) and she went on her way with a smile on her face and the knowledge that she had done a good deed for the day.

Rachel and I were safe and sound in our clean bunk beds.  We just needed to wait for the others to arrive.

Logrono Albergue – opposite a police station.

I personally found the city to be very busy and extremely commercial.  I prefer the small villages.  We had an early night (everyone has to be in bed by 10pm anyway) and didn't really get time to explore much of the city that evening.  We had a kebab for dinner!  What a missed opportunity that was!

We would set out in the dark first thing, which is when we lost Julie…