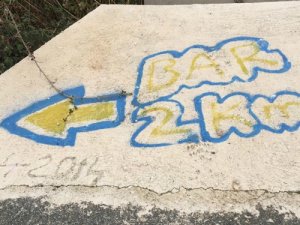 We are now back from chapter two of our Camino Frances journey and it is time to write up the blog. I love this part as I get to relive the adventure all over again! 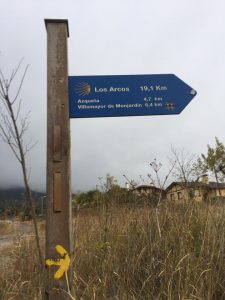 Last night we stayed in a private room in a hostal on the main Plaza which was owned by a lady who spoke no English.  I was extremely grateful that I had been learning Spanish over the last few months, so I managed to understand how much the room was going to cost me.  It was 35 euro's but well worth the investment of a good nights sleep on our first night in Spain.   We had clean sheets, clean blankets and no need to use our sleeping bags until tomorrow.

The evening was warm, and we enjoyed a very strange fashion parade which happened throughout the city.  Every half an hour, another one would pop up outside a retail shop that sold clothes or shoes.  British music was blaring out and gorgeous models hit the mini catwalks showcasing a whole range of outfits.  It was right up Rachel's street and she loved the atmosphere, as well as the clothes.  It was a bit of a bizarre moment evening, but highly enjoyable and it certainly set up up for good spirits for the next day.  Our first day walking and we were looking forward to the wine fountain. 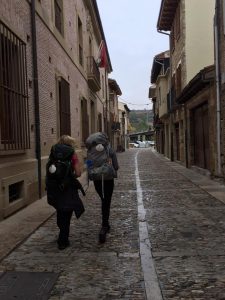 We woke up around 7am and agreed to meet Julie outside her Albergue at 8am.  Julie introduced us to someone who she got on well with during that night called Leslie from New York.  Little did we know that Leslie would soon become a member of our Camino family.  She was moaning as she had very little sleep that night due to the snorers and I liked her already!

Four of us set off up the hill looking for somewhere to have breakfast.  Surely there would be a cafe open at 8am on a Sunday morning in this lovely city?  There was no quaint little Spanish cafe, but there was a garage that sold coffee and fresh pastries.  We sat down and drank our first Cafe Con Leche (I also purchased a new pin for my rucksack).  Here we met some new Camino friends, which included my “backpack buddy”.  We laughed as her pack was brand new and was exactly the same as mine.  From that moment forward, whenever I saw the german lady we would hug and say “backpack buddy!”.  (You had to be there!). 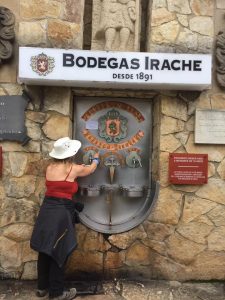 A few miles in (about 3 miles), we stumbled upon the famous wine fountain.  We heard rumors to say that it would not be open on a Sunday, but to our surprise it was! The area was really busy.  We met more pilgrims here, including one French guy who explained that his had a cyst on his bum and it was very painful (too much information!).  He subsequently filled up his water bottle with red wine from the fountain!

Julie went first.  She took her shell from her rucksack and went to the wine tap.  It came out a lot faster than she expected, so she managed to get quite a shell full!  She had a few gulps as a toast to our previous Camino family (Fernando, Ale, Brad, Theresa, Shane) and did a funny jig around the fountain to make it go down faster!  And then it was my turn!

The wine fountain is not the best red wine I have ever tasted.  In fact, I am convinced that it is actually the dregs that no-one wants!  It was really bad, but it had to be done.  Tick!  That's one off the list.

We set off following the little yellow arrows which were to be our friends for the next 10 days.  It's pure delight when you think you are lost and then you spot a little yellow arrow!  We headed out into vine land know and La Roja.  The scenery was stunning, although I am not sure about the grapes!  Julie was happily munching away with another new friend called Jason (also known as Bubba).  A real character who told us about his adventures on his first night as he ended up sleeping on the mountain because he was lost.  I got to know Bubba quite well over the next 10 days, and this gentle giant has a heart of gold.  (More about him later).

After 14 miles hiking we finally arrived at our destination which was the small town (village) called Los Lorcos.   The municipal was cosy, and we were lucky to be sleeping in a room for just four people.  I was still not feeling 100% so went to bed after our pilgrim meal.  I did not have the energy to play spoons, but it was good to hear the noise coming from the common room downstairs as Julie had herded people of all nationalities to enjoy this now famous Camino card game.   It did not last long though as they have strict rules in the municipals and 10pm sounded and everyone was told to go to bed.

In our room of four people was me, Julie, Rachel and a lady from Korea.  I remember waking up about 4am and looking over to her bunk bed.  She was sleeping with both legs in the air (A bit like my dog Poppy!).  How weird I thought to myself as I drifted back to sleep.  I woke up again around 6am and the lady had already packed up and gone.  I never saw her again.