We couldn't charge our phones in the hotel in Bayonne (one socket by the TV that didn't work), so I was very wary of using too much battery today.

We caught the 7.45am train to St Jean and the scenery was beautiful. We met Julie from Oz in the way as well as a Canadian lady who was rather large and not very talkative and an American called Brad, who became very good friends with us. 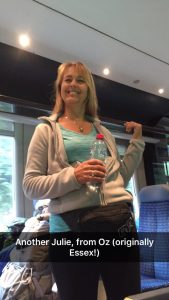 We finally found the passport office which was not what I was expecting. I thought it would be a bit like a customs office without hundreds of people queuing but it was dinky. The lady swerving Rachel and I had only seen five people so far.

After getting lost around St Jean (Julie saying “trust me its this way!), we were finally on The Way.

Boy, was the walk tough! It was only 6 miles but the weather was really hot and the climb was steep. I was panicking inside as we had not had a confirmation that we were booked for a bed at our first jostle “The Orrison”. Brad walked with us and closely followed by Fernando and his wife from Argentina.
We had many stops, got slightly tanned in the process, and enjoyed the scenery. We met Able, a 79 year old Mexican who now lives in Texas and German Marcus who was just perched on a rock backpacking (not the Camino). He gave some great advice… If it hurts then deal with it immediately. If you have a choice of the road or off the track, always take the road (a valuable lesson to learn on day one!).

The hunt for The Orrison Hostel to forever, but it was so worth it! Not only did we spot horses with cow bells, and mini statues under trees, we also spent some time watching an Eagle flying in the valley (stunning!).

I can not explain our euphoria when we turned the corner to see our hostel. It was like a welcome beacon and the Sangria was calling me! Our trusty friend Brad (USA) came up to us and congratulated us on our first leg of the journey. He had continued on when we stopped for a drink earlier. He had also left Julie a book (A Walk In The Woods) by Bill Bryson in the middle of the road, but we had not seen it as we took a different route.

I ate my first Spanish Tortilla (potato and egg omelette type thing), and we also drank two jugs of sangria before having a snooze.

The evening pilgrim meal was a completely new experience. We all ate together (soup, chicken and vegetables, and an almond custard cake thing). I was so proud of Rachel as she was by far the youngest in the room. She held conversations with a barrister from London called Vicky, who is slightly bonkers (in a nice way), and she got out of her comfort zone when we all did our round robin intros. Yes, even Rachel stood up and introduced herself to over 40 people in the room. Oozing pride! 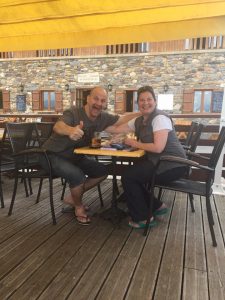 We ended the night with people from Italy, London, Argentina playing spoons (the card game). It got very loud. Rachel turned to me and said it was the best night of her life!

Just before we all went to bed there was a commotion on the veranda. Rachel poked means said “mum, you must come and see”. Due to the short thunderstorm during our evening meal, there was a double rainbow across the valley. I've never Sen anything like it. What an end to a perfect day. 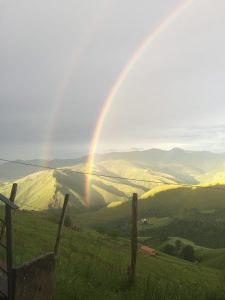 I've decided to write my journal entry in the mornings. I'm sitting here in my bunk with a German guy next door who has been farting all night! The room is very quiet and the sun is just coming up. I wonder what is in store for us today?