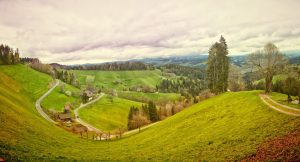 Well, today has been a real adventure. We picked Julie up about 8.30am and Matt dropped us off at MK station about 9.15am.

We arrived at Stansted just in time as the first train was delayed for 30 mins. We got through security quite quickly but then I realized that my Fitbit was missing! We had 10 mins to spare before the gate closed so I ran back to customs to see if anyone had handed it in, to no avail. I was gutted! For anyone who has a Fitbit then you will understand the feeling of knowing you are just about to go on a walking holiday with no step count!!

I was distracted whilst rushing to gate 53 and ran straight into the barrier (bruised my crotch!). Rachel and Jukie thought this was hilarious! We were queuing to board the plane when Rachel said “my lace is undone”. She stuck her foot in the air for me to tie up her boot laces and my FitBit went flying across the room! Yippee!!!!

The flight was also delayed for an hour, but we arrived at our hotel in Bayone around 5pm. We've had a lovely French meal of pasta, pizza and wine and an early night is on the cards.

The adventure of “The Way” starts tomorrow.

These Boots were made for walking ………. Ok so for anyone who is interested we have safely arrived in Bayonne with no major hiccups except delayed train & flight, oh and Julia walking straight into a barrier & losing her Fitbit ( total disaster as we may as well turn round & come home – everyone knows that walking without your Fitbit doesn't count!!! ) anyway it miraculously appeared half an hour later out of Rachel's boot!!!

Anyway – we've been on a local bus which conveniently dropped us outside our hotel where the manager spoke English – all going well. We've spoken a little French (mainly merci but we are trying) & got our own train tickets for tomorrow & met other “canonised” . Just having pizza & wine & off to bed ready for an early start tomorrow. All in all a good start to our trip.

Posted in Adventure Journals, Blog, Camino France
← Finding my "Why" for the CaminoDay 2 – Up, Up and Away! →